I’d been very much looking forward to this book, the last in the His Fair Assassin series, but it came out last fall when I was in the midst of the Cybils and had to wait for a bit.  It was worth it, though! 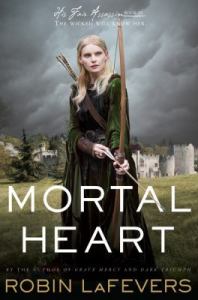 Mortal Heart. His Fair Assassins #3 by Robin LaFevers. Houghton Mifflin Harcourt, 2014.
This book follows Grave Mercy and Dark Triumph, and continues the trend of each book featuring a different one of our young assassin nun trio, Mortal Heart stars Annith, the shy and obedient sister who has been primed to be the abbey’s new seeress.  Annith was never excited about this, as the seeress is kept locked away, isolated even from the rest of the convent.  But with her superior skills at all the other assassin arts, and no sign of actual seeing talents, she had hoped at least to be sent on some missions outside the convent first.  Instead, the abbess – formerly her protector, Sister Etienne – is assigning her to care for the mysteriously ailing seeress, and sending out too-young Matelaine on a mission instead.  Annith’s obedience is put to the test, as she is forced to wonder if Sybille and Ismae’s dark suspicions about the Abbess might be true after all.

It’s only a slight spoiler to say that Annith leaves the convent, because what kind of a story would it be if she didn’t? And once out she meets very interesting people, including the dark, handsome and very troubled leader of lost souls (literally), who ride around the countryside trying to redeem the sins of their living lives.  We also meet, for the first time, the followers of another of the old God-Saints.  The Arduinnites are the daughters of the Goddess-Saint Arduinna, mother to those children born of women scorned or abused by their partners.  These women are skilled at the bow and ride around dressed in leather protecting the innocent.  And there are a lot of innocents in need of protection, as the French army is closing in on the young Duchess Anne, raiding the countryside on their way, and even her mercenaries are starting to turn against her as she runs out of money to pay them.  Into this mess rides Annith, trying to find her missing young convent sister, as well as Sybella and Ismae.

I was very happy to spend more time with both of them in this book as well – it’s always a bit sad when a series like this completely drops the old beloved characters in favor of new.  This felt like a decently satisfying balance, even as the focus stays squarely on Annith.  Things in the decended-from-Gods department do get a bit squicky at times, but I guess that’s what you expect when Gods start having children with mortals.  And – more like the first than the second book here – the international politics are very important to the plot, making this just as appealing for fans of political and historical fantasy as for romantic fantasy fans.  It’s top-notch stuff, and I recommend it highly to adult as well as teen readers.

Last month Tansy Raynor Roberts had this great post at SF Signal about how we keep collectively forgetting that women fantasy authors aren’t new.  She said, among other things, that Katherine Kurtz started the historical fantasy genre, and is not really credited for it.  I’ve talked about my love for Katherine Kurtz before and, now that I think about it, her Deryni novels might very well appeal to fans of this series – magic and dangerous politics with some romance in a solid historical setting.  Thanks also to Maureen at By Singing Light for her thoughts on remembering authors.  Following the assassin link might also take you to the more recent Death Sworn by Leah Cypess.

I'm a librarian and book worm who believes that children and adults deserve great books to read.
View all posts by Katy K. →
This entry was posted in Books and tagged historical fantasy, teen fantasy. Bookmark the permalink.