Interstellar Cinderella and Snow White and the Seven Robots

Here are two recent STEM-friendly sci-fi fairy tale retellings for young readers – one from the library and one my love found at our friendly local comic book store. 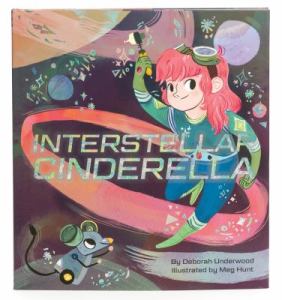 Interstellar Cinderella. By Deborah Underwood. Illustrated by Meg Hunt. Chronicle Kids, 2015.
This picture book retelling features a red-haired, pre-teen Cinderella (at least, she looked pre-teen to me, though a Publisher’s Weekly article said she looked old enough to be proposed to?) who delights in repairing robots and dreams of someday “fixing fancy rocket” instead of zoombrooms. Rhyming text and swirly, retro acrylic art tell the story of how her mean stepfamily doesn’t want to let her come to the Royal Space Parade. She’s crushed, but her fairy godrobot saves the day by delivering a special space suit. When the brown-skinned prince is trapped in a burning space ship, Cinderella saves the day with her sonic socket wrench. The prince is smitten – but Cinderella says “I’m far too young for marriage” and asks for a job as his chief mechanic instead. Everything here is just right, including making Cinderella a more relatable age for kids and taking the focus off the dress and the marriage. In a fun, extra touch, the endpapers are filled with two different scenes of Cinderella’s tools, nicely labeled for reference: “megamag mallet”, “antimatter hammer”, “cosmicaliper” and so on. This is a great choice for preschoolers and early elementary-aged kids.

Snow White and the Seven Robots. Far Out Fairy Tales. By Louise Simonson. Illustrated by Jimena Sanchez. Stone Arch Books, 2015.
This is a very short graphic novel – just 40 pages long– with the old-fashioned kind of diversity: Snow White is a pale-skinned girl who looks ordinary to Caucasians but who stands out on her blue-skinned planet of Techworld. She’s a princess, but her stepmother/regent genetically engineered her to fail in order to avoid turning over the throne. Here, the “huntsman” is boy only a little older than Snow who helps her when she’s forced to do garbage collection duty. When Snow is exiled to a small mining planet, the robot-fixing skills she learned from repairing garbage robots comes in very handy, and she soon has a loyal following. (Naturally, they are all intelligent robots with personalities.) Meanwhile, her friend back on the main planet infiltrates the palace to find out what the regent has done with Snow.

This is a longer retelling, and therefore good for slightly older kids. It took just two consecutive bedtimes to read it my daughter, who loved it. I have just two reservations about this book, which is part of a series of sci-fi retellings of familiar stories: first, that despite the diversity of the creators, there is no diversity of lead characters, and second, that the pages started falling out of the book on our first reading. Libraries wanting to purchase this should definitely pay for library binding, though this makes a super-affordable graphic novel more expensive than average. (We were lucky that my mother was able to rebind our copy for us.) And, OK, Snow White is a difficult tale in which to put a diverse heroine. Despite these reservations, this is a fun retelling of the story which my daughter was very excited about, reading it over several times to herself before and after I read it to her.

I'm a librarian and book worm who believes that children and adults deserve great books to read.
View all posts by Katy K. →
This entry was posted in Books and tagged fairy tales, picture books, youth graphic novels. Bookmark the permalink.