A Spy in the House. The Agency Book 1

And back to British mysteries for teens with Asian protagonists – yes, that does seem oddly specific, but there we have it.  This is another one my interwebs people recommended to me, and it is lots of fun. 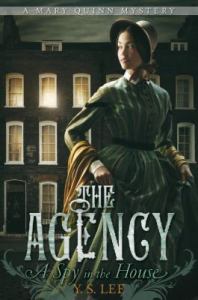 A Spy in the House. The Agency Book 1. By Y.S. Lee. Candlewick, 2009.
Mary was born in Victorian London with the last name of Lang. Her early story – you know, the typical orphaned, fell into a life of crime, was caught and sentenced to hang, only to be rescued by somebody working for a Mysterious Academy.  Fast forward several years, and our 17-year-old heroine, now using her Irish mother’s last name and going by Mary Quinn, is ready to learn the secrets of Miss Scrimshaw’s Academy for Girls.  She is assigned to work as a companion to Miss Angelica Thorold, and to spy on Mr. Thorold, who is suspected of smuggling Hindu artifacts. Things quickly get more complicated than she expects, as she finds herself hiding in the same closet in Mr. Thorold’s office as the handsome Mr. James Easton.  He’s also investigating Mr. Thorold, but for his own purposes.  How much can Mary trust him, and will forming the temporary alliance he suggests help or hurt her?  Mr. Thorold’s secretary Michael Gray, is also flirting with Mary and even less trustworthy.

Where Murder is Bad Manners is a school story told by girls old enough to notice the romance of others but not yet interested in them for their own sake, A Spy in the House takes things up an age level with a heroine just discovering independence and a taste of romance.  It has just the right level of twistiness of plot blended with Mary’s introspection on her role in life and the hidden passion. We wonder, along with Mary, will James ever get over himself to be worth caring for? This is the breathless intensity of first passion, mostly of the swoony and not actual physical activity variety.  I remember feeling like this myself as a teen, very seriously. As an adult, it comes across as hilarious, and I couldn’t tell which way Lee meant it. There’s some social awareness, as Mary lives with a higher class of people than she had previously but also learns more about the Chinese sailors, of whom her father was one.  I do want to read the rest of these books, even if I’ve had a bad case of new series start-itis this summer.

I'm a librarian and book worm who believes that children and adults deserve great books to read.
View all posts by Katy K. →
This entry was posted in Books and tagged Asian-British, diversity, teen mystery, teen romance. Bookmark the permalink.