This book was Maggie Stiefvater – a favorite author – writing middle grade fantasy.  How could I resist? 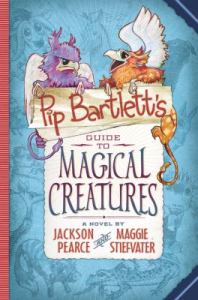 Pip Bartlett’s Guide to Magical Creatures by Jackson Pearce and Maggie Stiefvater. Scholastic, 2015.
Pip Barlett’s world is a lot like ours, except that magical creatures are real.  People raise unicorns for show, and have smaller, cuddlier magical creatures for pets, not always advisably.  No one but Pip, though, can talk to them, and everyone else believes that she’s playing pretend when she says she has.  After a nasty incident involving a herd of unicorns at a school event, Pip is sent away to live with her aunt who runs a veterinary clinic for magical creatures in a different town.  Pip is thrilled to help out in the clinic, even as she’s sad about leaving home and uncomfortable with her snotty older cousin Callie, who wants nothing to do with the magical creatures. She is forced to be more extraverted than she would like and make friends with shy Tomas from down the street, who becomes a worthy friend despite being allergic to nearly everything. Pip works on annotating her guidebook to magical creatures, writing in where the official word falls short of what one would actually need to deal with the creature.  These pages are included in the book: drawings of the creatures with extra-large, cute eyes and Pip’s notes in handwriting next to the typed captions – it is all both funny and adorable.

The action heats up literally as the town is suddenly crowded with Fuzzles, cute and fuzzy creatures that breed very rapidly and catch on fire when scared or excited.  Where did they come from, and why are there suddenly so many of them?  And an enemy arrives, in the form of Mrs. Dreadbatch, an inspector determined to shut down the much-needed clinic.  Pip and Tomas both have to use the abilities that no one else believes in to solve the problems before it’s too late.

This is fun and light, perfect for kids just starting into full-length chapter books.  It wasn’t quite so interesting to me as an adult as I’d wanted, even if I couldn’t really put my finger on anything wrong or missing.  I’d still happily give it to younger kids, though, especially as more books in the projected series come out.  This would be a natural fit for fans of Suzanne Selfors’ Imaginary Veterinary series.

I'm a librarian and book worm who believes that children and adults deserve great books to read.
View all posts by Katy K. →
This entry was posted in Books and tagged youth fantasy. Bookmark the permalink.