The Ordinary Princess for Flashback Fridays

Flashback Friday is a feature I’m borrowing from Stephanie at Views from the Tesseract, whose post on this very book inspired me to read it to my daughter.  (She included more of the fantastic illustrations, too!) 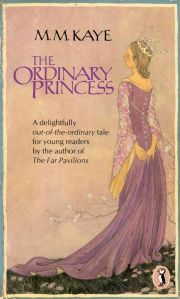 The Ordinary Princess written and illustrated by M.M. Kaye. Doubleday, 1980.
This is a book that I loved as a child, without paying any attention to the name M.M. Kaye, who is probably better known for her serious adult works such as The Far Pavilions. (I still haven’t read any of her adult works however.) This summer I thought my daughter might be old enough for it, so we read it together at bedtime over the course of a couple of months.

Amethyst Alexandra Augusta Araminta Adelaide Aurelia Anne of Phantasmorania is the seventh princess in her family, born even more golden-haired, blue-eyed and sweet-tempered than her six older jewel-named sisters.  But at her christening, the fair Crustacea arrives (dripping with seaweeds) and gives her the gift of being ordinary. Amethyst becomes so very ordinary that everyone calls her just Amy.  And as she’s much too ordinary to be set on a pedestal as her other sisters are, she spends her time exploring in the woods without worrying about the freckles.

The only hitch is that she’s too ordinary-looking to attract the usual sort of husband material.  When her father and his councilors hatch a dreadful plan involving hiring a dragon to Lay Waste the Countryside, Amy decides to take matters into her own hands, which eventually involves her running low on resources and taking a job as a scullery maid at the castle in a neighboring kingdom.  There she meets a young man, Peregrine, who calls himself a “man of all work” and even more wrinkles develop…

This is a sweet and subversive fairy tale – though as it was first published 30 years ago and the author started writing it twenty years before that, it feels much less subversive that it would have 50 years ago. Amy, with her “mousy brown” hair instead of blonde, is the most diverse character in the book, and there’s equally no whiff either of romance beyond straight or of the possibility of a happy single life. None of those keep me from loving this book to pieces, however, and the messages that are here are still important: that who you are on the inside is more important than what you look like, and that working too hard on the outside can make it harder to pay attention to the inside and to the world outside of yourself. Amy knows that she enjoys herself and her life much more for giving up on worrying about her appearance. She has to work for her living, and work hard. And the romance that develops isn’t about social position or physical attraction, but a slow blossoming of friendship into something deeper.  All of this is packed, with humor and affection, into a chapter book of 112 pages, including the author’s beautiful illustrations.

It turned out to be a little too much for my little girl to keep track of just as she was falling asleep at night – but I found it even more delightful than I remembered it being.  We’ll try it again when she’s older – I’d say it would be good for independent readers of 8 and up, and younger for reading aloud.  Have you read this? What did you think?

I'm a librarian and book worm who believes that children and adults deserve great books to read.
View all posts by Katy K. →
This entry was posted in Books and tagged Flashback Fridays, youth fantasy. Bookmark the permalink.

1 Response to The Ordinary Princess for Flashback Fridays