My giveaway for the graphic novel Oddly Normal is open for just a few days more – that’s another book good for, but not limited to, Halloween.  Go enter now!

October 31 is also the birthday of Juliette Gordon Low , founder of the Girl Scouts.  Thank you for believing in girls, Juliette!  I recently read the picture book biography Here Come the Girl Scouts by Shana Cory, illustrated by Hadley Hooper to my Daisy troop – they were very impressed by the beautiful portrait in the back!

Here’s one more spooky book just before Halloween – one that I’m handing off to a horror-loving middle schooler as soon as I write this review. 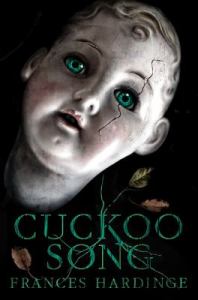 Cuckoo Song by Frances Hardinge. Amulet Books, 2015.
When Triss wakes up, the people calling her are only vaguely familiar, and she can’t remember falling into the lake as the people who are supposed to be her parents say she did.  As they decide to cut their vacation short, everyone hopes that being in familiar surroundings will help Triss recover her memories.  Everyone except Triss’s younger sister, Pen, who is inexplicably furious with Triss.  But going home only drives home the fact that Triss doesn’t know things that she should know.  Other strange facts: Triss is always hungry, no matter how much she eats.  There are always dead leaves in her hair when she brushes it. And dolls open their eyes and turn their heads when she walks by.

Triss is badly frightened.  As she sets out to find out what is wrong, she learns both that something is very wrong with her – but also that the family that looked so perfect at first is falling apart, as symbolized by the bedroom that’s supposed to be left untouched in memory of the older brother who never came back from war (World War I going by technology, though it never says outright), but that in fact has regular visitors.  The more she learns, the more she realizes that she has very little time indeed to stop something truly horrible from happening.

This is horror where you find that the shadows you were telling yourself not to be frightened of – you really should be careful about. Yet as scary as the supernatural things are – they were only let in because of the horrible things done by well-meaning humans.  Even though there is plenty of action (on motorcycles! Jumping over rooftops! Falling into freezing water!), this is creepy, not gory, keeping it appropriate for middle grade kids or sensitive adults.  The characters are well-developed and the language is beautiful without focusing too much attention on itself – here’s one quote:

“The Old Docks had not faded gently. They did not look sad… Neglect had given the Old Docks a dangerous air, like that of a half-starved dog.” (p. 333)

I might have passed this up despite the numbers of my blogging friends who are fans of Frances Hardinge, as horror isn’t usually my thing.  I’m so glad I did read it, because it is excellent.

Official disclaimer – this book is nominated for the Cybils award, but this is my personal opinion on the book, not the opinion of the Cybils committee.

I'm a librarian and book worm who believes that children and adults deserve great books to read.
View all posts by Katy K. →
This entry was posted in Books and tagged youth fantasy, youth horror. Bookmark the permalink.