The winners of the Cybils awards will be announced in just a couple more days!  My daughter is in first grade right now, and though she prefers to check out early chapter books for herself, easy readers are really her level right now.  And as anyone who’s ever tried to find a good easy reader knows, it’s really tough to write a book simple enough for beginning readers to manage while still being fun to read. Here’s what we read from the Cybils Easy Reader finalist list: 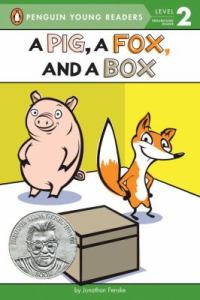 A Pig, a Fox and a Box by Jonathan Feske. Penguin Young Readers, 2015.
A sly fox would really, really like to eat that cute and chubby pig.  He keeps thinking of ways to do so, usually involving hiding in the large box nearby.  Spoiler alert: in chapter after short chapter, he fails.  The amusing part is how, and it’s more amusing the farther along the story goes.  Funny enough for the whole K/1 class, for my 6-year-old to read to us more than one, and for the 11-year-old to enjoy reading to his sister.  Oh, and it won a Theodore Geisel Honor, too. 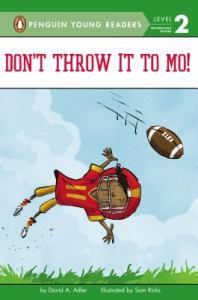 Don’t Throw It to Mo!  by David A. Adler. Penguin USA, 2015.
Tiny Mo loves football, but everyone is surprised when he actually makes the football team. Will he be able to do anything useful in a real game?  The language is simple and the story is uplifting and funny – a perfect combination.  I think the K/1 class enjoyed it, but unfortunately, my daughter is not the least bit attracted to football and wouldn’t pick it up.  This was also the winner of the Theodore Geisel Award.

Ling and Ting: Twice as Silly by Grace Lin.  Little, Brown 2015.
This one is a little more advanced than the first couple.  It’s divided into short chapters, though I was still able to read the whole book aloud in 20-30 minutes.  I read this one to my daughter while we were waiting at the library during a car repair that went longer than either of the kids wanted to wait, which I’m sure accounts for my daughter’s tepid reaction to the book.  Ling and Ting are very silly, Lin’s artwork is delightful, and this story is perfect for kids who will enjoy books like Clementine in a couple of years.

Picture Perfect (Sofia Martinez) by Jacqueline Jules. Picture Window Books, 2015.
This is the book I bought for my daughter when I was at Kidlitcon in October.  It’s nudging up just another step towards being a full-fledged early chapter book.  Sofia is a vivacious girl growing up in a loving extended Latino family.  Her adventures – losing a small pet, trying to distinguish herself from her older sisters – are very relatable. Spanish phrases sprinkled throughout were (I thought) easily understandable in context, and are defined in the back as well just in case.  The pictures are bright and happy with a retro-modern feel.  This is one we both enjoyed, and one I’ll add to my list of good birthday party gift books.

Have you read any of these?  What were your favorites?