So as I said, somehow I’ve not been able to get to all the Cybils finalists I’ve wanted to.  There were seven picture book finalists, and I have read only four of them.  At least I very much enjoyed the ones I read!

Hoot Owl: Master of Disguise by Sean Taylor and Jean Jullien. Candlewick, 2014.
Besides being a Cybils finalist, Stephanie at Views from the Tesseract listed this as one of her top ten fantastical picture books from 2015.  (It was also nominated by my fellow MG Spec Fic round 1 panelist Anamaria of Books Together – thanks, Anamaria!)  In the story, an adorable and hungry young hoot owl searches for a meal.  The art has mostly dark colors with black outlines that feel like they were painted with a thick brush, though they could be acrylic.  The poor hoot owl is not as successful at hunting small critters as it would like, but the drama and the vocabulary are exquisite: “The night has a thousand eyes, and two of them are mine. I swoop through the bleak blackness like a wolf in the air.” “I am a master of disguise. I devise a costume.” We had so much fun with this, and ended up sharing it with my daughter’s class as well.

Mango, Abuela and Me by Meg Medina. Illustrated by Angela Dominguez. Candlewick, 2015.
I honestly can’t remember if I checked this one out because it was on the Cybils shortlist or because of the double Pura Belpré Honor medal – but this book is touching and funny and was a hit everywhere I took it.  Abuela has come to live with Mia’s family.  Abuela doesn’t speak English, and Mia doesn’t speak Spanish.  In poetic language, Mia describes how she and Abuela find words to use together, with the help of a new parrot. “Cozy” might not be a word typically used to describe picture book art, but that’s how this felt to me, so that I could feel the love between Mia and Abuela even when their words couldn’t express it. My daughter asked for it over and over again, and I read it to her Girl Scout Daisy troop, who all loved it, especially and most happily for me, our girl who speaks Spanish at home herself. 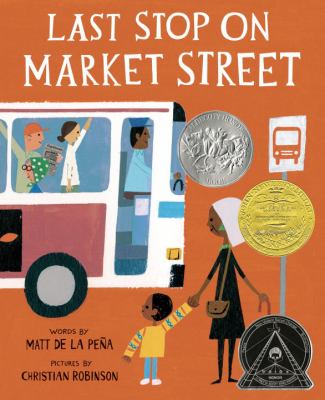 Last Stop on Market Street by Matt de la Peña. Pictures by Christian Robinson. G.P. Putnam’s Sons, 2015.
I was thrilled when this book won the Newbury, and now I’m very curious to see what the Round 2 Cybils committee thinks!  Young C.J. wants to go home and play after church, like all his friends, but his grandmother takes him on the bus with her to go serve soup at the soup kitchen.  The journey is just as important as the destination here – C.J.’s grandmother finds beauty and community everywhere she goes.  My daughter and I enjoyed this lots, though sadly, it wasn’t a hit when I read it to her class.

Sidewalk Flowers by JonArno Lawson. Illustrated by Sydney Smith. Groundwood, 2015.
This is one I brought home over the summer, I think, as I was hearing so much good about it.  A young child and father walk through city streets.  The child (referred to in most reviews as a girl, though there’s really no indication one way or the other) picks flowers from sidewalks and leaves them again in places that need them – for a homeless person, or a dead bird, for example.  The art is mostly shades of gray, with spots of color for the child’s red coat and the bright yellow flowers.  It is really beautiful, but unfortunately, not one that my daughter liked at all.  Hopefully it will be more appealing to other kids, and even maybe to her in a different mood!

Here are the books I still need to read:

Bug in a Vacuum by Melanie Watt.

In a Village by the Sea by Muon Van.

Have you read any of these?  What are your thoughts?

I'm a librarian and book worm who believes that children and adults deserve great books to read.
View all posts by Katy K. →
This entry was posted in Books and tagged African-American, Armchair Cybils, Cybils, diversity, Latino/a, multiculturalism, picture books. Bookmark the permalink.