Here’s me trying hard to have read all the Cybils finalists before the winners are announced February 14.  I’m failing in most every category – somehow life never just lets me sit down and read the way I’d like it to.  I came closest in this category, with six out of seven books read.  (I’m amused now to see how many of the finalists were nominated by fellow mg spec fic panelists from this year and last.) 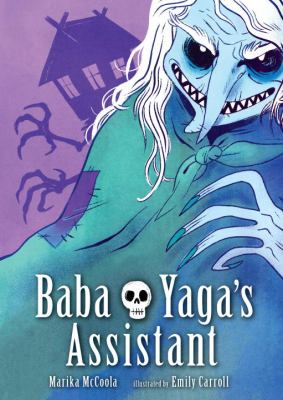 Baba Yaga’s Assistant by Marika McCoola. Illustrated by Emily Carroll. Candlewick, 2015.
Masha is a teenaged Russian Jew in the new world (the Jewish is quite understated).  Her mother died when she was young, leaving Masha her nesting dolls.  Until recently, though, Masha’s grandmother was very involved in her life, giving her the affection her father has never been able to show her and telling her the stories from the old world.  When her grandmother dies, her father brings home a new wife with a bratty younger daughter. Masha decides it’s time to leave, and answers an ad in the paper for an assistant to Baba Yaga.  She knows it will be risky, but also figures she’s heard enough of the stories to be able to meet the challenges Baba Yaga will set her.  Emily Carroll’s beautiful artwork won her a spot on the finalist list last year as well.  It’s perfectly suited to this story, with an expressive palette that ranges from bright to dark.  There are subtle clues hidden throughout, and the embedded fairy tales are carefully distinguished from the main story by folk borders.  Baba Yaga is ambiguous, both cruel and helpful, and Masha’s coming of age story plays beautifully.  This one was enjoyed by three generations at my house – though the six-year-old decided it looked too scary still. Thanks to Melissa of Book Nut for nominating it!

Courtney Crumrin Vol 7. Tales of a Warlock by Ted Naifeh.
I wasn’t able to find this at any library in the state, and my purchase request didn’t go through fast enough for me to get to this.  I’m going to hope to read this later anyway, as I’ve really enjoyed the other Ted Naifeh books I’ve read, including Polly and the Pirates and The Good Neighbors.

Dragons Beware! by Jorge Aguirre and Rafael Rosado.
I really love both this book and Giants Beware! – both much less well-known than they deserve to be.  Thanks for nominating it, Charlotte!

Roller Girl by Victoria Jamieson.
I’d brought this one home earlier this year based on Brandy’s recommendation – it was a hit with everyone at my house.  I was thrilled to see it get some Newbury love, too!  And going by circulation count at my library, it’s far and away the most popular of all the titles here. Thanks to Maureen for nominating it! 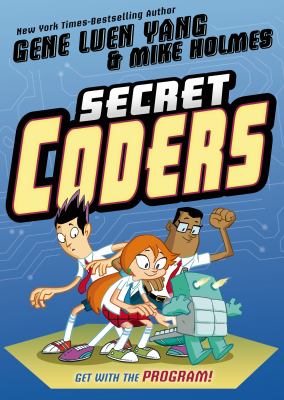 Secret Coders by Gene Luen Yang and Mike Holmes. First Second Books, 2015.
Hopper’s mother has made her start at a new private school, one where there are mysterious codes everywhere.  She and her new friend Eni, a fellow basketball lover, try to solve the puzzles, uncovering secret tunnels and such.  It involves such things as four-eyed robot birds that read Arabic numerals and show the binary equivalent and a robot turtle that can be programmed to do a set variety of tasks, much like the robot turtles in the game of the same name.  It’s a story meant to get kids excited about coding, and come with breaks for kids to figure out the puzzles on their own before the characters do.  It’s a worthy concept, with attempts at making the characters real as well, but it still ended up feeling more didactic than fun to me. I wasn’t able to get my son’s reaction on this one, but I’d prefer to stick with actual coding games for getting kids excited about coding and Yang’s many other great books for reading. 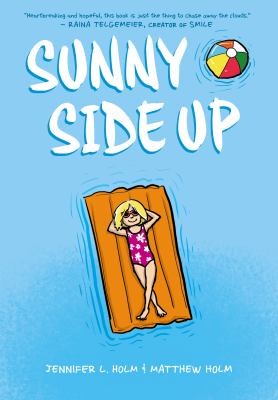 Sunny Side Up by Jennifer L. Holm and Matthew Holm. GRAPHIX, 2015.
The brother and sister team behind the super-silly, super-popular Babymouse and Squish series turn to a more serious topic with this realistic historical. It’s 1976, and Sunny is being sent to spend the summer with her grandfather in Florida. It should be fun, but he keeps taking her just on errands with him and never to Disney World.  Her gradual figuring out of what to do with herself is punctuated with memories of her brother’s increasingly erratic and disturbing behavior. Was it something she did?  “I can kind of guess where this is going,” said my son as he was reading it.  You can, but Sunny’s journey of understanding what’s going on is nonetheless valuable and relatable, while softened by the distance of time and the heat of the Florida sun.  It’s not all grim lectures, either, as Sunny is befriended by the one kid her age in her grandfather’s retirement community, the son of one of the maintenance staff members.  Together, the two of them find odd jobs to do around the community to earn money for comics, so that Sunny’s discovery of classic superheroes is woven through the story as well.

The Marvels by Brian Selznick. Scholastic, 2015.
Selznick again uses his signature style of full-page picture spreads to tell the first story in this book.  Where his other books have sections of prose interspersed with sections of the picture storytelling, here we have the story of generations of a theater family told in pictures. Then, in prose, the story of boy in the early 1990s running away to his uncle’s house in London, where he learns about the theater family the Marvels and tries to figure out how he is connected to them.  I was also really impressed that Selznick was able to work the devastation of the AIDS epidemic into the more modern-day story, without naming it and never feeling heavy-handed about it.  People had lost loved ones for lots of different reasons through all the stories, after all.  I’m more torn on the overall impact – I very much enjoyed the stories while being really impressed at the mastery of both storytelling forms.  But while my daughter was attracted by the gilding on the cover and the paper edges, I couldn’t get my son to pick it up at all due to its heft, even when I suggested (heresy, I know) that he read just the graphic portion of the story.  That’s a downside to an otherwise marvelous (sorry, I couldn’t resist) story, as I can graphics are the one fiction format that my reluctant reader will read on his own for fun.

I'm a librarian and book worm who believes that children and adults deserve great books to read.
View all posts by Katy K. →
This entry was posted in Books and tagged Armchair Cybils, Cybils, youth graphic novels. Bookmark the permalink.