Graphic novels are top on my kids’ lists of books they want to read, and I usually struggle to keep up with them.  Here are four we all enjoyed in the past few months – two of which turned out to be Cybils Elementary/Middle Grade Graphic Novel finalists. 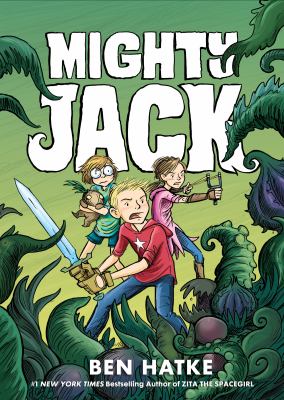 Mighty Jack by Ben Hatke. First Second, 2016.
This latest from favorite Hatke (Zita the Space Girl, Nobody Likes a Goblin) clearly starts as a take on Jack and the Beanstalk, but goes off in wild directions.  The story opens with a close up on a kitchen counter piled with unpaid bills covered in red ink.  Jack’s mother is working two jobs and still not quite able to make ends meet, while leaving Jack in charge of his nearly wordless younger sister Maddy.  She’s quite persuasive anyway, and, while at a flea market with their mother, convinces Jack to pay for a chest of seeds that the shady-looking merchant claims are magical.  Short on money, Jack ends up paying with their mother’s car.  That’s only the very beginning of trouble, as the seeds grow into a garden of monsters, which Jack and Maddy battle with help from homeschooled and sword-wielding Lilly from down the road.  I’m pretty sure that Lilly, like Zita, is modelled after one of Hatke’s daughters, and there are also cameo appearances from other Hatke characters, including the shady merchant and the mechanically minded girl from Little Robot.  This is a fast, fun ride, with gentle treatment of serious issues like poverty and Maddy’s never-named mental/social issues.  While all the characters are white, I’m feeling OK with showing poverty especially as something that doesn’t only affect people of color. Warning: this story stops right in the middle of an important arc.  Still, it made this year’s Cybils Finalists for a reason! 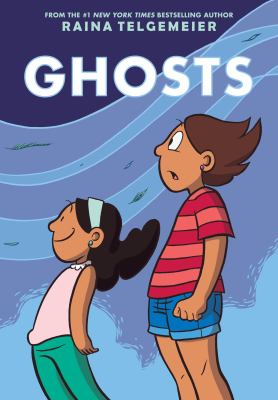 Ghosts by Raina Telgemeier. Scholastic, 2016.
Cat and Maya have never been much in touch with their mother’s Mexican heritage when they journey to the foggy Northern California town of Bahia de la Luna.  Their family is hoping that the climate will help with Maya’s progressing cystic fibrosis.  Cat makes new friends, including Carlos, who gives ghost tours around town, and Seo Young, more into make-up and boys than Cat.  Meeting ghosts helps Maya comes to terms with the possibility of her own dying, something Cat is even more reluctant to face.  Everything culminates at the town’s big Dia De Los Muertes celebration, when private family celebrations combine with everyone – living and dead – meeting in the town square. Together with the normal pangs of middle school – first crushes, making new friends, dealing with parental limits, done with humor and sympathy – this hits all the points of being a smash hit.  It was especially poignant for my family as my daughter also has chronic health conditions – stable right now, but which, realistically, could get worse at any time.  As my love likes to say to people asking if she’ll ever be out of the woods, we’ve just built ourselves a cozy cabin in the woods.

This book landed on almost every best graphic novels of 2016 list I looked at, oftenthe only title not aimed at adults on these lists.  But there has been a great deal of criticism of cultural appropriation from the Latinix community, as well as protest from the cystic fibrosis community for Telgemeier’s painting of a disease that has been very successfully treated in recent years as a relatively short-term death sentence.  As I am not part of either of these communities, I can say only that I respect their opinions.  Ms. Yingling has a nice round-up of responses in her review of Ghosts. 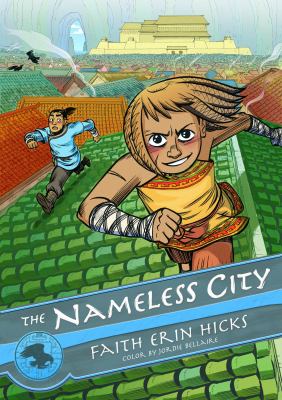 Nameless City by Faith Erin Hicks. First Second, 2016.
Kaidu has newly arrived in the Nameless City from the country.  The city is nameless to those who live there because it’s been invaded so many times over the centuries, each new conqueror giving the city a new name.  Kaidu is a member of the Dao, the current rulers of the city, and has come to meet his father, a general.  But things are not easy for a small country boy with a big name – everyone in the fortress thinks he needs to be taken down a peg.  Thus, Kaidu finds himself slipping out of the fortress and making friends with a building-jumping street girl who gives her name as Rat.  Kaidu and Rat both find themselves confronting deeply help prejudices in order to make friendship work.  Kaidu’s illicit actions help him see bigger problems in the mood of the city, things that will put lives in danger and that he will only be able to stop with help from Rat – if he can convince her to trust him.  With an all-Asian feel, this has definite Avatar: the Last Airbender vibes.  We gave it to my son for Christmas, and he read it multiple times before school started back up.  It was also a Cybils finalist.  It’s the start of a series and I’m really looking forward to more! 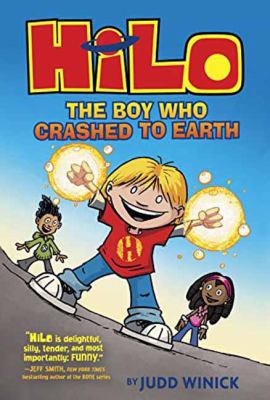 Hilo: the Boy who Crashed to Earth.  Random House, 2015.
D.J. feels like he’s the only one of his large family who isn’t good at anything.  The only thing he was good at was being friends with Gina, who moved away a couple of years earlier.  Then, he finds a relentlessly cheerful if confused boy, Hilo, crashed into the ground.  Hilo has very little idea about who he is, where he came from, or even how the world works – but he needs to figure it out quickly, as giant robots seem to be chasing him.  D.J. and Gina, newly moved back to town, have to help Hilo figure out what’s going before it’s too late.

I’m late on the train with this 2015 title, but it’s a great one with casual diversity, D.J. coming from an Asian-American family while Gina is African-American.  That’s mostly in the background as the focus of the adventure is on figuring out who’s after Hilo and why.  Find out more in last year’s Hilo: Saving the Whole Wide World. Hilo: the Great Big Boom is due out in February 2017.