I was interested to see what the author of Cybils finalist Bayou Magic would do with the topic of September 11, just recently far enough in the past for students to need to learn about it in school. 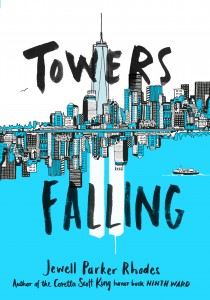 Towers Falling by Jewell Parker Rhodes. Little, Brown and Co., 2016.
The good news is that Deja’s family is still together.  The bad news is that they’re at a homeless shelter.  Her father can’t hold down a job, and her mother can’t make enough to afford housing for their family of five. Deja has to start at a new school, along with taking care of her two younger siblings.  When her new teacher tells the class that they’re going to be learning about 9/11, she wonders what it could possibly have to do with her. As she works with her new friends, Ben from Texas and Sabeen, whose family is from the Middle East, she learns a whole lot about the connections that hold families and communities together, and how the effects of the past reverberate into the future, and what America and being American means to different people.  It turns out that this event that she thought had nothing to do with her has directly affected her family.

It is so hard to write a book on such hard topics that works for middle grade kids. The adults here emphasize both the importance of knowing what happened because it’s had such a large effect on daily life to this day, but also that kids shouldn’t be exposed to the videos to see the full horror of that day.  Deja is attending the school that in real life saw the events unfold through their windows. But Rhodes keeps the story positive by showing people of lots of different ethnic backgrounds using the past to create a better future.  This is a friendship and family story, just as much as it is a history story, and an excellent entry point to start discussions on 9/11 for older elementary and middle school students.

This book was nominated for the Cybils in the audiobook category, and I’m sorry to say that it is a case of the author not being the right choice to narrate her own book.  She made a couple of narrative choices that make sense individually – Deja is understandably unhappy, and sounds it. The text is lyrical, and she emphasizes this by carrying the words together in long arcing phrases.  The net effect, though, was that the book is read in a sustained whine that got under my skin like a kid begging for candy.  I had to stop the audio (which had kindly been provided to me by the publisher), and turned instead to the print version from the library, which worked beautifully.  Your mileage may vary, of course – but I recommend reading this book in print.