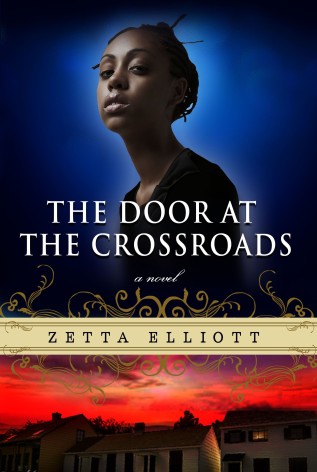 A Wish after Midnight by Zetta Elliott.  Skyscape, 2010.
15-year-old Genna lives in Brooklyn with her Afro-Latinix family.  She’s never quite fit in either at home or school, where everyone else seems happy with stereotypical inner city lives.  She finds refuge in the nearby city garden and in the library, where she also falls for her classmate who works there, Jamaican-born Judah.  Judah’s sharing with her a pride in African heritage that she’s never felt before – when suddenly she finds herself in Civil War Brooklyn.  There, everyone expects her to “know her place” – which definitely doesn’t include her open goal of being a psychiatrist.  Will she ever find Judah and her way home again?

The Door at the Crossroads by Zetta Elliott.  Rosetta Press, 2016.
Judah and Genna’s story continues in this book, starting with Judah’s experience as he, too, was pulled back to the 19th century.  But while Genna found paid work in a white household in Brooklyn, Judah is kidnapped and sold into slavery, with profound effects on his view on life.  Back in the modern day, Genna is desperate to get him back.  Not knowing what caused either episode of time travel, she turns to Voudoun, even as Judah’s friend Peter, whose heritage it is, urges to respect it as a real religion, not a tool bag to take just what she wants out of.  Both Judah and Genna are changing, and things are never as simple as they hope.

Both of these books combine action and character development with a whole lot of issues –including discussions around sexual violence, torture, treatment of LGBT people, and societal expectations around race and gender. Elliott is steering away from showing either the past or the present in an overly rosy light, as bad things and good happen in both times. There’s a lot of history and a lot of questions without simple answers.  I’d been hearing about A Wish after Midnight for some years, but hadn’t found it in my library, and was glad when The Door at the Crossroads being a Young Adult Speculative Fiction Cybils finalist last year gave me an excuse to track them both down with the marvels of books requests and interlibrary loan.  They are a little on the preachy side, but balanced with the exciting plot and characters.

Midnight without a Moon by Linda Williams Jackson. Houghton Mifflin Harcourt, 2017.
This is a middle grade book I heard about from Brandy at Random Musings of a Bibliophile, who I see loved it enough to nominate it for this year’s Cybils in the Middle Grade Fiction category.  It’s 1955 in Mississippi, and Rose Lee Carter, age 13, is being raised by her grandmother, Ma Pearl, who’s also taking care of Rose’s younger brother and their cousin Queen.  Rose and her brother have skin as dark as “midnight without a moon,” which has affected every aspect of their lives.  Their mother left them when offered the chance to be a stepmother to lighter-skinned children, and their grandmother treats them very poorly, favoring “bright” Queen, who’s allowed to sit and read hand-me-down magazines from the white landlady all day while Rose and her brother do the housework and work in the fields.   Even Rose’s best friend Hallelujah, the preacher’s son, seems taken in by Queen’s beauty.

When Emmett Till is found murdered, reactions in the Black community are split between those like Ma Pearl who feel that things like this wouldn’t happen if people just remember their place, and those like Rose’s Aunt who believe that they must stand up for themselves and create change.  Rose will have to decide what she is willing to do, and whether to put her own future or the future of Mississippi first.  It’s notable here that, in contrast to Genna’s exploration of multiple religions, Rose ends up finding strength in her church and Christianity.  This is a moving story that highlights the relevance of this time to our own. Rose’s skin may be dark, and the times are even darker, but her spirit shines strong.

Acknowledgement: Thanks to Ms. Jackson, who ran a giveaway of the sequel to this book at Random Musings of a Bibliophile.  Midnight without a Moon is available now; A Sky Full of Stars comes out in January, 2018.