Jasmine Toguchi: Super Sleuth by Debbi Michiko Florence. Pictures by Elizabet Vuković. Farrar Straus Giroux, 2017.
I’d been wanting to read the new Jasmine Toguchi series, especially because I have a Japanese-American niece who’ll be needing some early chapter books in a couple of years.  (I started with the second one because the first was checked out.)  Jasmine is getting excited for her family’s annual celebration of Girl’s Day.  This year, though, her big sister Sophie is saying she doesn’t want to participate and Jasmine is crushed.  Meanwhile, she’s also looking forward to a sleepover with her best friend Linnie.  They start out playing with the cool clothes in the neighbor’s garage, a favorite pastime.  Then Linnie asks to leave.  Jasmine has to use her detective skills to figure out several mysteries – including her sister and Linnie’s behavior, and why the neighbor has a garage full of strange clothes.

My daughter was turned off by the sleuth aspect initially (who knows why), but ended up enjoying the book.  I really appreciated the relatable sibling and friend issues – some Jasmine’s fault and some not – combined with some fun insight into Japanese-American culture, including a craft at the back.  Vuković’s illustrations are sweet and the perfect addition to round out the story. 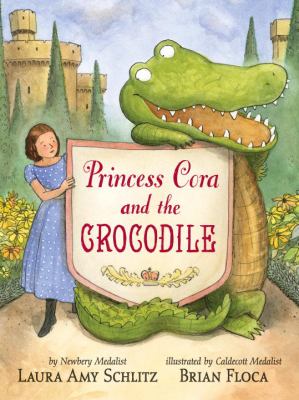 Princess Cora and the Crocodile by Laura Amy Schlitz and Brian Floca. Candlewick Press, 2017.
With a double-medal-winning team, this Cybils finalist could hardly be anything but stunning.  Princess Cora is adored by her parents when she’s first born, but soon they realize that cute toes won’t help her in the real world.  She’s led to a hemmed-in life transferred from one adult to another: multiple baths a day from her governess, even though said governess won’t allow messy play, dull political books with the queen, and exercise in the dungeon with the king.  When Cora makes a heart-felt wish for a puppy, her fairy godmother instead gives her a crocodile.  The crocodile (who can talk) offers to put on Cora’s clothes and pretend to be Cora so that Cora can spend a day outside.  This leads to lots of hilarity both in the text and the pictures, as well as Cora finding the courage to speak up for what she needs.  Fun for everyone, but perfect for over-scheduled children. This one my daughter insisted her teacher read aloud to the whole class. 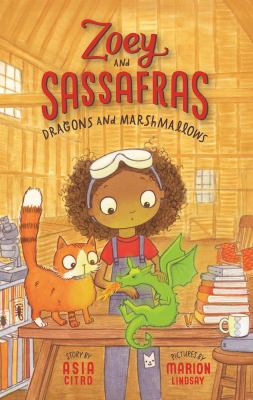 Dragons and Marshmallows. Zoey and Sassafras Book 1. By Asia Citro. Illustrated by Marion Lindsay. Innovation Press, 2017.
Zoey is out with her cat, Sassafras, when they find a frog that glows.  Her mother says that this means she can see magic, and shows her the magical doorbell on the barn that’s placed for magical animals to ring when they need help.  But Mom is headed out of town for a conference, so when a baby dragon shows up, Zoey is on her own.  Her mother has taught about scientific principles and how to conduct experiments, and Zoey uses this to figure out what to feed the little dragon.  Subsequent books in the series feature similar combinations of magical creatures and science explorations, all tied together with adorable illustrations.  It may be “rainbow sprinkle” diversity, since Zoey and her family’s brown skin doesn’t seem to have any cultural components, but I still found it refreshing to have a science book with a dark-skinned girl lead.  My daughter read all four I found her from the library and started over again.