Here are thoughts on some of the early chapter books I read this fall, any of which would make good gifts for the 7 to 9 year-olds on your holiday shopping list

My Furry Foster Book 1: Truman the Dog by Debbi Michiko Florence. Illustrated by Melanie Demmer. Capstone, 2019. 9781515845607
From the author of the Jasmine Toguchi books comes a new series about a girl and her family’s experiences fostering pets.  Kaita is excited to foster the young, untrained dog Truman until he can find a new home. Even though he causes lots of problems, they are all very patient and positive with him.  This first book in the series had so much background information on how to be a good foster family that the rest of the book fell a little short for me, but I have hopes that the second book will be better, and young animal lovers may not notice in any case.  My personal favorite part was the afterward, which compared the real girl Kaita that the series is based on with her fictional character. 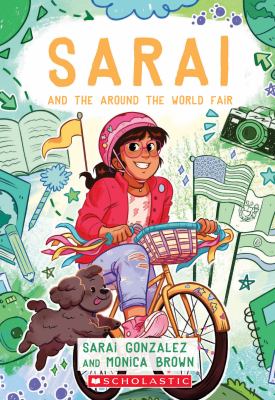 Sarai in the Spotlight by Sarai Gonzalez and Monica Brown. Scholastic, 2018. 9781338236699
Sarai and the Around the World Fair by Sarai Gonzalez and Monica Brown. Scholastic, 2109. 9781338260953
I read two of these books, a collaboration between established author Monica Brown (Lola Levine is Not Mean) and Sarai herself, a YouTube star (or so I hear.)  These stories are based on her life, and show her family – their mixed background from Peru and Costa Rica, and her younger sisters Lucía and Josie (who has cochlear implants).  In Sarai in the Spotlight, Sarai’s best friend has moved away and Sarai is having a tough time with some of the other girls at school.  She makes friends with a quiet new girl, Christina, but then has problems when she wants Christina to perform with her in the school talent show, but Christina isn’t comfortable performing.  In the second book, Sarai has outgrown her bike – but when her grandfather starts salvaging rusty old bike pieces to build into a new bike for her, Sarai really isn’t sure it will be good enough.  Also, since her family background covers multiple countries, which country should she talk about for her school’s international event? Sarai is a winning character with a warm family, showing lots of acceptance for Sarai and her siblings being themselves.

EllRay Jakes is a Rock Star by Sally Warner and Jamie Harper. Viking, 2011. 9780670011582
This is a little bit older series.  The author is white, but it’s one of the few early chapter book series with an African-American boy protagonist.  (Boy protagonists in general are rare in the early chapter book world.) Here, EllRay wants to be popular and keep up with friends that have expensive things his family just doesn’t.  He sneaks some crystals from his geology professor father’s office while the dad is out on a business trip. He just means to show them off – but ends up giving them away. Uh-oh! EllRay’s family includes his mother, a fantasy author, and a younger sister.  There are realistic dilemmas and a good sense of humor for lots of kid appeal.

What are your favorite early chapter book series?