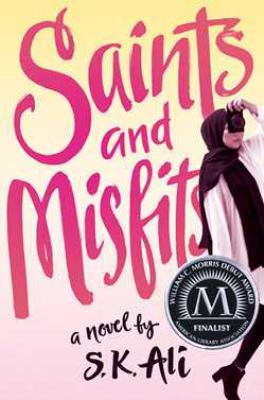 Saints and Misfits by S. K. Ali. Salaam Reads, 2017.
Meet Janna, a teen girl trying to figure out her increasingly complicated life.  She’s  committed to wearing hijab as part of her mostly artsy, layered outfits (swim suits are a notable and awkward exception.) Her divorced parents observe their faith very differently – her now-remarried father mostly doesn’t, and gives her a hard time for her conservative clothing.

Janna struggles with a crush on a non-Muslim boy and her brother Muhammad falling for the most annoying, super-girly, upbeat-religious girl at the mosque.  But worst of all, the handsome cousin of her best friend, Fizz, tries to assault her during a party at Fizz’s house.  She’s beset with fear in case it should happen again, at the same time sure that no one would believe any allegations against a person with such a perfect public front.

At the same time, her character is rounded out by her sweet relationship with an older man in her apartment complex, Mr. Ram, whom she takes to play games at the senior center.  She also helps her uncle with the mosque’s web site, keeping it updated and editing the grammar on his “Ask the Imam” letters to standard English.  She also enjoys sneaking up to the roof of the school to eat halal gummi bears with her best friend there.

I started listening to this on audio and had to quit – the reader was one of those who slowed down for unnaturally clear and therefore awkward-sounding diction and used only one cadence for every sentence.  I was starting to hate the whole book – but once I switched over to print, Janna’s true, prickly-sweet personality was able to shine through.  Janna’s faith is an important part of the book, but any teen who struggles with friends, family and boys will find something to relate to here.

I'm a librarian and book worm who believes that children and adults deserve great books to read.
View all posts by Katy K. →
This entry was posted in Books, Print, Realistic, Teen/Young Adult and tagged #OwnVoices, Muslim, teen fiction. Bookmark the permalink.

3 Responses to Saints and Misfits by S. K. Ali