Girls Made of Snow and Glass by Melissa Bashardoust

Look!  I read one of the books on my missed-from-2017 list.  This is a lovely Snow White retelling for a teen audience with an LGBT spin. 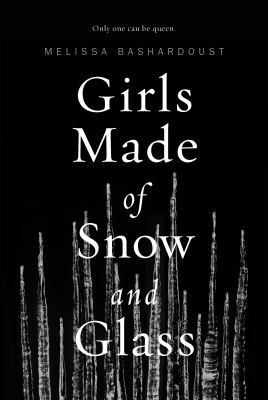 Girls Made of Snow and Glass by Melissa Bashardoust. Narrated by Jennifer Ikeda. MacMillan Audio, 2017.
In alternating narrations, we hear the stories of two girls growing into women: Mina, whose alchemist father pushes her to use her beauty to gain advantage, telling her that she’s incapable both of loving and of being loved for herself.  Partly with his pushing, partly with her own skill, she earns a marriage to the grieving widowed king living in Whitespring, where winter never leaves.

Linnet is the daughter of that king, and has grown up idolizing her stepmother.  As a girl, she craves adventure, climbing trees and walls in the courtyard whenever she can.  Her father, though, wants her to be delicate and refined, just like the dead mother she resembles.  The older she grows, the more she’s torn between her desire to please her father and her need to be her own person. The beginnings of change to this unhappy balance come when a young female surgeon, only a year or two her senior, comes to work at the castle.

The relationship here is a lot more interesting than in the typical Snow White story – Linnet loves Mina wholeheartedly, while Mina believes she’s incapable of love and is also pushed by the king not to try to replace Linnet’s mother.  There’s a lot here of women discovering their own power and their own way to love outside of what they’re told is proper.  Jennifer Ikeda’s rich voice works very well for this fairy tale setting which conveys classic magic in a historic setting despite the more modern romantic aspects.  Though I’ve focused on the personal aspects in this review, there are also quite a bit of politics as Mina and Linnet must work to keep the kingdom together, as well as thoughts on the worship of the past queen who caused the everlasting winter. Highly recommended.

Here are some other Snow White retellings I’ve read, in order from middle grade to adult.