This was one of my most anticipated titles for the year, which I realized rather belatedly I listened to over the summer and hadn’t yet reviewed.  Though I started reading Naomi Novik back with His Majesty’s Dragon, I really loved the more fairy-tale oriented Uprooted, and was so, so excited to see her come out with more in the same vein.  So excited that I made my love buy the audiobook so that I could get to it faster. 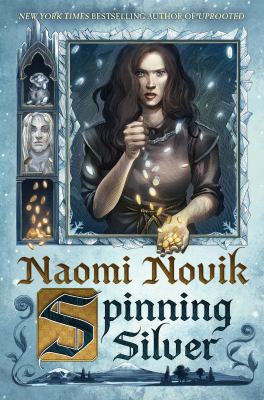 Spinning Silver starts off with the main character, Miryem, telling the story of Rumpelstiltskin.  She hates it – people borrowing things they have no hope of repaying, then telling themselves that the person they borrowed from is a monster, not worth repaying.  She’s the moneylender’s daughter in a small village in Lithvas.  She’s grown up in poverty because everyone in town looks down on Jews like them and refuses to pay her soft-hearted father back.  When her mother’s health starts to fail, she makes herself hard and takes over the business, earning enough to buy her mother medicine, to put money in the bank, and even hire a servant to take care of her abandoned household chores.

The servant is Wanda, the oldest child of an even poorer family outside of town.  Her father has borrowed against their failing farm and spent everything on drink, taking out his frustrations on his children.  Wanda leaps at the opportunity to get away from him, hoping also to earn enough to move out for good once his debt is paid off.

Our third main character is Irina, the daughter of the duke in the city where Miryem’s grandfather lives.  She may be the duke’s daughter, but she’s a disappointment, a girl not beautiful enough to marry well.

Until Miryem’s skill with moneylending – a reputation with turning silver into gold – brings her to the attention of the Staryk king, ruler of the winter dimension that runs alongside Lithvas.  He brings her a bag of silver coins that gleam with the light of a winter forest to turn into gold, with her life at stake. Though the task is impossible, Miryem is used to fighting for her life (and still observing Shabbat.)  Her success will not only bring her even harder tasks, but also set in motion changes to Wanda and Irina’s lives.  Irina is brought to the attention of the Tsar, the cruelest man she has ever met, and one she’s been trying to avoid since girlhood.

Many others have written about this more eloquently than I can, but here’s trying to sum up some of the magic of this book.  The story is woven together from the viewpoints of the three different women, all with unique voices, though other characters narrate the story sometimes as well.  Even though all three of the women suffer mostly because of being women, and though the women fight to control their own destinies, few of the men are beyond redemption and many of them are sympathetic.  Even the Staryk king may be heartless towards humans but is acting the best he knows to keep his own people safe. The politics of religion and prejudice – both about religion and class – are an integral part of the story as well.  It’s set in a beautifully realized world with strong elements of Slavic folklore.  I’ve tried to limit my description of the plot to avoid spoilers, but those looking for an exciting plot, politics, and races against time will not be disappointed here. My love and I listened to it on audio, where Lisa Flanagan read with distinct voices, all sounding Slavic enough to bring that aspect more in focus without making it hard to understand.  This is definitely a favorite.