Thisby Thestoop and the Black Mountain

I’m not having a lot of time to write reviews with my kids home from school and seeing friends and family for the holidays, but here’s one more Cybils nominee review to tide you over until the finalists are announced next week. 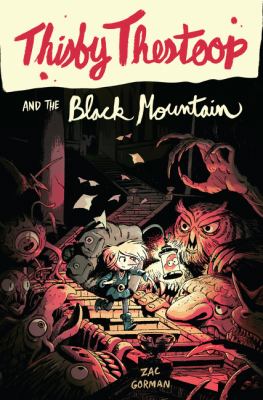 Thisby Thestoop was found as an infant, abandoned by the stoop of a dungeon, and named for a misinterpretation of the note – “Found this by the stoop”.  Like Wiley Snare, she’s grown up working in the dungeon, though her job is gamekeeper to the many and various creatures of the dungeon.  She travels around with her enormous backpack full of supplies, and her glowing slime friend Mingus in a jar.  Unlike Wiley, she doesn’t have any special talents for her job, but survives by taking lots of notes.

Just now, the big project is preparing for an inspection by the prince and princess of Nth: the well-liked, charming Prince Ingo and the very unpopular, even mean-spirited Crown Princess Iphigenia.  Then, Prince Ingo and Thisby’s unpleasant boss both go missing.  Thisby is Iphigenia’s only hope of getting out of the dungeon alive.  And as creatures from the Darkdeep, the even more dangerous realm below the dungeons, start to escape, Thisby’s goal of making it to the surface seems even less possible.

Michigan author and graphic novel artist Zac Gorman’s illustrations add a note of whimsy to the book, showing two girls with different shaped noses as well as numerous non-human dungeon inhabitants.  All humans in the book appear white, though dungeons do seem likely to produce pasty skin.  The book is focused on the difficulty that Thisby and Iphigenia have going beyond their differences in class and upbringing to come to a place of trust and friendship, even as their lives depend on it.  It’s also got a fine feminist theme to it –refreshing since most of the books I’ve seen that feel aimed at a D&D crowd also focus on the male characters.

This would of course pair well with Escape to the Above, as well The Dungeoneers.  The combination of humor and illustrations also reminded me of previous Cybils finalist Castle Hangnail.

I'm a librarian and book worm who believes that children and adults deserve great books to read.
View all posts by Katy K. →
This entry was posted in Books, Fantasy, Middle Grade, Print, Reviews and tagged dungeons, Michigan, youth fantasy. Bookmark the permalink.

1 Response to Thisby Thestoop and the Black Mountain