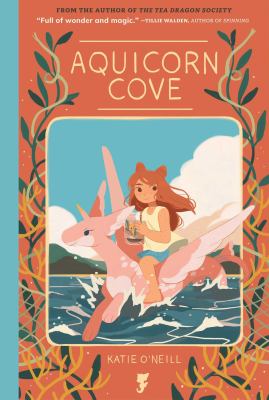 Aquicorn Cove by Katie O’Neill. Oni Press, 2018.
I’m really fond of Katie O’Neill’s beautiful art style paired with woman- and queer-power storylines and couldn’t resist getting this one for my daughter for Christmas.  In this story, young Lana is visiting the tiny island fishing village where her aunt lives and where her mother died. Ever-worsening storms are threatening the village, though.  It’s up to Lana and the magical aquicorns she meets to help find a new balance. As usual with O’Neill, the story itself is short but heartfelt, and paired with stunning art. An author’s note explains more about current threats to the ocean and how they affect both humans and ocean life.

Sanity & Tallulah by Molly Brooks. Disney-Hyperion, 2018.
Two kids living on a space station have to save it in this fun science fiction story.  Sanity is the inventor, and Tallulah her slightly crazy but loyal friend. Sanity has done some definitely against the rules experimentation to create an adorable three-headed kitten, Princess Sparkle, Destroyer of Worlds.  When it escapes and things start to break on the ship, it’s up to the girls to find the kitten before the angry adults do. But on the way, they find that things are much worse than they originally thought. There are some side plots with other characters, but the main focus here is on the two girls and their awesomeness as well as mistakes.  The art is cheerful and straightforward and will appeal to fans of Raina Telgemeier or Ben Hatke. I’m still waiting for some graphic novels for Black girls by Black women or girls, but this is a fine and entertaining story that I will happily pass on to kids. The kids in school in space element here also reminded me of the Astronaut Academy books by Dave Roman.

The Hidden Witch by Molly Knox Ostertag. Graphix/Scholastic 2018.
The story from Cybils-award winning Witch Boy continues here.  Aster won the right to get witch lessons with his female cousins, but it’s hard when the aunts who teach it clearly don’t want him there.  Meanwhile, his best friend Charlie meets a new girl at school, Ariel, a foster child who is convinced that she can’t make friends and who has grown bitter from all the rejections she’s faced, making this as much Charlie’s story as Aster’s.  Then, Aster’s grandmother asks him to work with his great-uncle Mikasi, who’s been stuck in dragon form for decades. That will require a lot of courage on Aster’s part. The book has themes of secrets, and the power of stored and amplified negativity to hurt, versus that of friendship to heal.  The art includes some very creepy depictions of misused magic, as well as a stunning spread in which melting candle wax holds scenes from the past. My daughter reread this many times before we could take it back to the library.