Compelling Nonfiction Graphics: Astronauts and When Stars are Scattered

Here are two recent nonfiction graphics, both with stories strong enough to be interesting for readers who don’t naturally gravitate towards nonfiction as well as those who do.

The top-notch science comic duo of Jim Ottaviani (Dignifying Science reviewed here, and many others as well) and Maris Wicks (Primates with Jim Ottaviani, and several of the Science Comics books on her own) team up again to tell the story of real women astronauts, mostly from the point of view of real-life astronaut Mary Cleave, but also including the story of Soviet cosmonaut Valentina Tereshkova and others.  It’s really engaging, and the illustrations add so much to the story, showing when people are elated or sick to their stomachs when flying, wanting to eat their words, or flattened by extra-heavy gravity when practicing moving in zero G during airplane flights.  It illustrates the uphill battle women faced, especially in the United States, and NASA’s slow shift towards deliberate inclusiveness with help from Star Trek star Nichelle Nichols.  My daughter wouldn’t pick it up until she heard me laughing over it, and since then, part of my struggle to review it has been that she keeps stealing it out of my pile of books to review to reread. 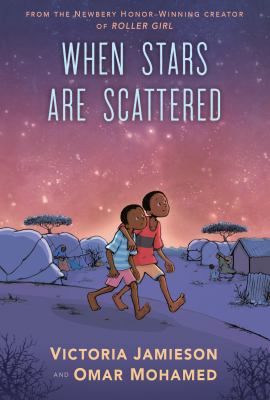 The graphic memoir for kids gets a new twist here, as Somali refugee Omar Mohamed teams up with Newbery-Honor winner graphic novel artist Victoria Jamieson (Roller Girl, All’s Faire in Middle School) to tell his story, growing up in a refugee camp.  He and his little brother Hassan have been here for seven years, clinging to the hope that their mother will find them, though they are cared for by an kind older lady, Fatuma, whose own family is missing.  The camp has been set up for so long that it’s grown into a city, with markets, a school, and mosques, even though it doesn’t have electricity or plumbing.  The art captures the beauty of the desert, the monotony of daily life, and the warm community around them despite the difficulties.  As he watches his friends go to school, Omar is torn between his own desire to go to school and learn and his need to take care of his younger brother, who is nonverbal.  Always, for everyone, is the wild hope that they will be selected for visas to come to the US or Canada. Omar has blocked his memories of the events that brought them to the refugee camp, so that only tiny bits of these worst moments come out late in the story.  There is also some mention of a young teen girl being made to drop out of school to get married, and this is handled as gently and with as much nuance as possible.

I had been worried that this subject would be too intense for my very sensitive daughter, but she asked to buy it as soon as she heard that Victoria Jamieson was coming out with a new book, and has gone on to read it several times since.  This is gripping and essential reading.

1 Response to Compelling Nonfiction Graphics: Astronauts and When Stars are Scattered