There was a day, about two weeks ago, when I finished a book and had no new library books waiting for me to read. Not one. In a panic, I went to the new fiction shelves at the library and took several youth fantasy books. I paid special attention when reading my journals and blogs and put lots of titles on hold, because I had nothing at home.

I have plenty to read now. Definitely more than I can read before they’re all due. This was one of the ones I pulled off the new shelf, just based on how many times I saw the title come up in the weekly review summary at Charlotte’s Library. 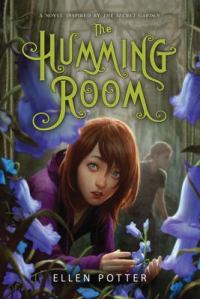 The Humming Room by Ellen Potter
Here’s a book that says straight off that it’s inspired by The Secret Garden, one of my favorites. This made me nervous once I realized it, but it came off well – like a well-done fairy-tale re-telling, close enough to follow the plot, but different enough to have its own unique spin.

Roo Fanshaw is 12 when her drug-addicted, ne’er-do-well father gets himself murdered. Only when she’s being taken to him does she learn that she has an uncle. He lives on Cough Rock, a small island in a river in upstate New York just big enough for his former child tuberculosis sanatorium turned mansion. The part of the housekeeper, Mrs. Medlock, is played by the stylish but strict Ms. Valentine, while cheerful Martha’s role is taken by the friendly, jean-clad 20-year-old Violet. Roo has been moved around often enough to be distrustful and antisocial, but she quickly learns to love the river and is curious enough to explore the large building, even though she’s told which wing to avoid. Outside, she finds a tiny cave by the river bank, just big enough for her. It’s there that she meets a boy who introduces himself as Jack, paddling around the river in his kayak and considered just a legend by most of the native population. Inside, she hears a mysterious humming noise, and traces it to her cousin Phillip, who’s been in poor mental and physical health since the unexplained death of his mother four years earlier. Both children are initially afraid that the noises that they hear from the other are the ghosts of tuberculosis victims, and some time is given to the sad fate of those children. There is, of course, an abandoned garden for Roo to bring to life as well – this one a greenhouse Amazonian jungle. Roo has never gardened before, but, unlike Mary, has always had a habit of listening with her ear to the ground and being able to hear the earth and what it’s saying to itself. The characters, especially Roo and Phillip, feel well-rounded and believable, similar but not identical to their counterparts in the original. Fans of The Secret Garden are of course the natural audience for this, but the modern setting and the slightly enhanced mystical elements give this appeal to those who wouldn’t necessarily go for historical fiction. Like the original, there’s frequent mention of death, but no in-book violence or romance, making this just right for middle grade readers.

I'm a librarian and book worm who believes that children and adults deserve great books to read.
View all posts by Katy K. →
This entry was posted in Books and tagged youth fantasy, youth fiction. Bookmark the permalink.

1 Response to The Humming Room