It’s been crazy busy again, so I will just mention in passing that the Cybils and the Amelia Bloomer Awards, both some of my favorites, have been awarded and you should go find them and read more books. 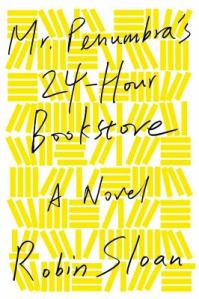 Mr. Penumbra’s 24-Hour Bookstore by Robin Sloan
Clay Jannon, unemployed former graphic designer, wanders into Penumbra’s 24-Hour bookstore and asks for a job. It’s a tiny footprint with soaring ceilings, filled all the way to the top with books on long ladders. In front is an odd, seemingly random collection of modern books, but the heart of the collection is in the next room back, where old-fashioned, solid-colored books are filed seemingly randomly. Clay sets himself to the mystery of how the store stays in business. Paying customers, who buy from the selection in front, are random and very occasional. More often, but still rare, are visits from a group of older people, all working through what Clay dubs the Wayback list. None of these people pay, and Clay is instructed to write down everything about their words and appearance in a journal. As a first step towards gaining more customers, Clay takes out a tiny, targeted Google ad, which brings in a hot young Googler named Kat. Partly in an effort to impress her and turn a first date into a relationship, Clay starts telling her the mystery of the bookstore, even going so far as to make a 3-D computer rendition of the store, complete with an animation of the books as they are borrowed. Clay’s best friend from high school, Neel Shah, is now a wealthy tech business owner. They bonded in high school over role-playing games and a love of The Dragon-Song Chronicles by Moffat, an epic fantasy. When Clay’s innocent explorations cause Mr. Penumbra to go missing, he goes to Neel and Kat for help finding him, and exposes a cult devoted to ancient masters of print Geritszoon and Manutius. It’s an adventure, but one that happens with mostly reputations at stake rather than lives. It’s set very much in our world, and while some people believe that there is magic and others don’t, it’s not entirely clear who is imagining things. Underneath it is a love letter to print books from someone still excited by modern technology, clearly hoping for a happy marriage between the two. It might or might not count as fantasy, but it was definitely delightful.

On a lengthy road trip, Clay finds himself listening to an audio version of his favorite series for the first time, and has this to say about it:

“When you read a book, the story definitely happens inside your head. When you listen, it seems to happen in a little cloud all around it, like a fuzzy knit cap pulled down over your eyes[.]”

What a great description of audio books! I often struggle to describe to people who only read books in print that while I, too, love the feel of the book and look of the type, there’s something about listening to a book well done that drags me in and brings the characters to life in a way that imagining their voices doesn’t quite do. I often think back to a patron I had a while ago who, when asked if s/he wanted the audio or print version of a book said, “Oh, print, of course. Audio books are cheating.” So many places to go with that! But for now, I’ll go with: I have way more books to read than I can get through in my lifetime. If cheating is what it takes to be able to read a few more, then by gum, I’ll go on cheating.

I'm a librarian and book worm who believes that children and adults deserve great books to read.
View all posts by Katy K. →
This entry was posted in Books and tagged Adult, Fantasy, modern fantasy. Bookmark the permalink.