I’ve been waiting for a couple of years now for my son to be old enough to read this series, which I keep hearing about from Charlotte at Charlotte’s Library. Finally, I thought, we might be there. I brought it home from the library – but not quite yet. The handy Scholastic book leveler says that it’s a grade 4.3 or Guided Reading level R book, and my son is reading on target for late grade two. I read it aloud to him instead, and he gave it an enthusiastic thumbs-up. 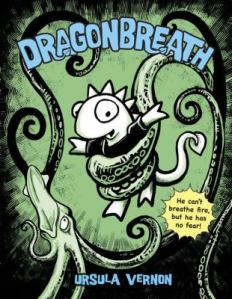 Dragonbreath by Ursula Vernon.
Danny Dragonbreath, 5th grader, is “the only mythical creature at a school filled with reptiles and amphibians.” He can’t breathe fire yet, though he practices frequently. This is the first of his adventures with his best friend, Wendell the iguana. He’s got some troubles at school with Big Eddy, a Komodo dragon who resents Danny says he’s a dragon, and keeps stealing his lunch. This time, Danny might be saved by a rogue potato salad. But he’s on to bigger problems – the report on the ocean that he made up in the bus on the way to school got an F, and Danny needs to rewrite his paper with some actual research fast. Wendell, a cautious critter prone to do things the traditional way, suggests a trip to the library, but Danny isn’t interested. Instead, he decides to pay a visit to his Uncle Edward, a sea serpent. Taking the handy bus that goes from their town to the Sargasso Sea, they are soon ringing Uncle Edward’s doorbell on the docks. He provides them with some breathing mints so they can join him underwater, and they are soon on their way, exploring a coral reef, skirting the guards around Atlantis, and visiting a shipwreck and the dark deep sea. Except for Atlantis, the information is realistic, and could inspire some trips to the nonfiction section of the library. It’s all exciting fun with a big sense of humor, perfect for grade school boys. (Not that girls wouldn’t enjoy it – I did – but for those looking specifically for books for boys, this is a good one.) In addition to spot illustrations, there are comic panels interspersed every so often – a little like Diary of a Wimpy Kid, but with segments that will go for a page or three, showing the most exciting parts of the story before switching back to prose. The blend of regular school mishaps, science adventure, and fantasy was a potent one for my boy. It made for fast reading aloud. We finished off the last half in under an hour while he was in bed with a fever, perfect entertainment for the situation. It’s a great choice for reluctant or beginning readers, and I’ll add it to my list of First Fantasy Chapter Books.

I'm a librarian and book worm who believes that children and adults deserve great books to read.
View all posts by Katy K. →
This entry was posted in Books and tagged dragons, youth fantasy. Bookmark the permalink.