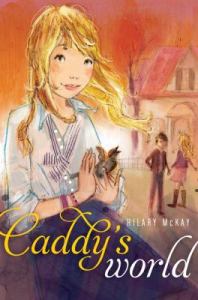 Look! I finished a series!

Caddy’s World by Hilary McKay.
This is the most recently published book in the Casson Family series, which started with Saffy’s Angel. The four Casson Family books that came between Saffy’s Angel and this one were all delightfully different in terms of what was happening, but similar in that it was always the same quirky Casson family, featuring some amount of time with each child in the family and his or her trials, no matter whose name was on the cover, as well as a character who wanted to be part of the Casson family. I read them all and enjoyed them very much, but didn’t feel a need to review them all individually. I love the children. Eve Casson, the mother, manages to pull through despite her distraction, while Bill, the father, simultaneously saves the day and is generally despicable.

This book jumps back in time to when Caddy, the oldest, is 12. Her life revolves around her small circle of friends, a stable quartet each with her own defining characteristic: “Alison – hates everyone. Ruby is clever. Beth. Perfect. Caddy, the bravest of the brave.” But change is coming. Many of the girls, including Caddy, see change coming and fight it as hard as they can, trying to change who they are so they can fit where they were. Ruby has earned a scholarship to the local private school, which sounds dreamily academic, but would mean leaving her friends behind. Beth is growing taller every day, and begins eating as little as possible so that she can stay small enough for her beloved pony (this part was especially distressing.) Alison carries on as usual, hating everything. Caddy fights furiously any hint that her quartet might not stay as close as they are now forever. She is changing, too, and here develops her first crush (one of many, we know), a boy named Dingbat who effortlessly charms three of the four friends, and would give up the three to have the one resister.

Meanwhile, those readers like me reading in publication order finally get more detail on Rose’s birth and why Eve needed to name her Permanent Rose. Rose is called just the Fireworks Baby at first, because she was meant to be born in November, close to Guy Fawkes Day, though she arrives in summer, several months too early. Caddy felt that her family was large enough already, but even once the baby has charmed her, she is upset, fearing that Rose will suffer the same fate as all the baby birds she’s tried to rescue herself. Even though having read the others I knew that Rose would be OK, I loved learning more of her story and seeing her go from an alien, awkward creature (McKay is very honest in her descriptions of the frightfulness of a very premature baby) to a healthy member of the Casson pack. Even as much as I enjoyed the other books, I was still deeply impressed with her ability to take so many different plot lines and characters, both ranging from the ordinary to the extraordinary, weave them together cohesively, and make me care about all of them.

I wish it weren’t the end of the series.

You can read what other book blogging people thought of this at:
Sonderbooks
Ms. Yingling Reads
The Book Nut

I'm a librarian and book worm who believes that children and adults deserve great books to read.
View all posts by Katy K. →
This entry was posted in Books and tagged series, youth fiction. Bookmark the permalink.