Many apologies for my silence, dear readers! Crazy busy is not new, but at least entertaining: At work, I’m very busy getting ready for my big Talk Like a Pirate Day event, featuring a treasure hunt through downtown. This involves me trying to write rhyming clues for people to find the right shops, and my poetry skills, if I ever had them, are very rusty. At home, my daughter is getting old enough to move to her own room. Clearing out the room that’s been our study for the last 10 years is challenging enough, and left me without my computer for several days. Then, in repainting the walls, we discovered that the windows have to be stripped completely down, as they’ve been painted so often that the paint only sticks to itself and then comes off in sheets. Now our nice long-weekend project has turned into one that we’ll be lucky to have finished in a month. So, back to books. Much more fun – this is jumping back in time a little to the nice fat book I took on vacation with me. 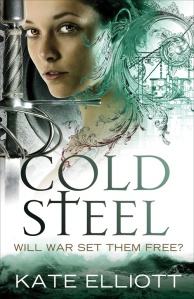 Cold Steel. Spiritwalker Trilogy Book 3. by Kate Elliott.
This is the last book in the trilogy that began with Cold Fire. That leaves it with a lot of loose ends to tie up: can Cat rescue her husband Vai from her sire, the Master of the Wild Hunt? What does her sire want from her anyway? If she frees Vai from the Spirit World, can she then free him from his masters in the mortal world, the mages of Four Moons House? Will she get revenge against the fire mage, James Drake, who made her life so difficult in the last book? Which of Bea’s many suitors will she choose, and will she survive to choose any of them? And should Cat stop or aid Camjiata, the Napoleon-like general who’s trying to conquer Europe, promising a more equitable legal code for everyone? Also, it turns out that Cat’s actions at the end of the last book – which succeeded in saving Bea from her sire – have caused chaos in both the mortal and spirit worlds, for which she’s being held responsible.

This is another big journey, starting in the Caribbean and ranging all over Europe and multiple cultures’ parts of the Spirit World. The cast of characters is large, but vivid enough that I was able to keep track of them with only a little mental effort. Both the wide-ranging plot and large casts are things that can bother me – I really have too many things going on in my head at one time to have much patience with authors who want me to put the effort of a college course into their world. But Elliott does a great job keeping the plot focused around our main characters even as they have their fingers in many, many pots, and never lost my interest along the way. Cat is still stubborn and full of ideas that may or may not be good, but which she will definitely have to try before she can be talked out of them. She’s also an extremely amorous person, but her attentions are all focused on her husband and not described in romance-novel detail, making this good for teens and adults who don’t want to intrude in the bedroom. And even though Vai is the love of her life, I love that her closest family – cousin raised as sister Bea and brother Rory stay primary in her life: It’s just as much Cat and Bea against the world as it is Cat and Vai. This was a satisfying end to the trilogy, and a book I’m happy to have on my shelf.

I'm a librarian and book worm who believes that children and adults deserve great books to read.
View all posts by Katy K. →
This entry was posted in Books and tagged Fantasy, steampunk. Bookmark the permalink.