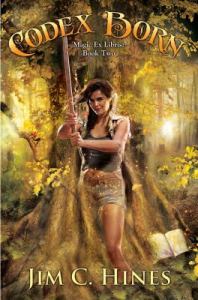 Codex Born. Magic Ex Libris Book 2. by Jim C. Hines. DAW Books, 2013.
This sequel to last year’s Libriomancer continues the story of librarian and libriomancer Isaac Vainio. There’s action, geekery, romance, and deep thoughts on the meaning of literature and beauty. (One of my most-reread books of all time, Robin McKinley’s Beauty, also plays a starring role – because if you can pull objects out of a book, having a library with every book ever written in it is enormously useful.) While the main story still follows Isaac, each chapter opens with some backstory from Lena, Isaac’s dryad lover, who is well worth getting to know. (I like the cover lots, but Lena is described as both curvier and darker-skinned in the text.)

Isaac is still working for the Portenare, the organization behind formal libriomancy, but his distrust of its still-living founder, Gutenberg, has only grown since the first book. Meanwhile, his home and Lena’s oak – essential to her staying alive – are attacked by a swarm of telepathic metal bugs. Isaac recognizes them as creations of his murdered friend and fellow libriomancer, but they’re clearly now being controlled by a malign force. The story line acquaints us with the Chinese version of libriomancy and some of its practitioners, as well as the wendigo and werewolf population of northern Michigan.

While Lena ponders the beauty in every person and the poverty of narrow definitions of beauty, Isaac thinks about the deep connections between people that literature can forge. Despite the thinky thoughts, though, this is an action book, with one tense moment following another. It’s marketed for adults, and has lots of violence and several inexplicit sex scenes, at a level that I would be comfortable giving a teen of the less sensitive variety. I am in general exhausted by nonstop thrills in my book, which might be why I liked this book a lot, but didn’t love it. It frustrates me, as I like so many parts of it and really want to love it. However, as my research shows that most readers prefer plot-driven fiction, if the premise sounds fun, please track this down!

I'm a librarian and book worm who believes that children and adults deserve great books to read.
View all posts by Katy K. →
This entry was posted in Books and tagged adult fantasy, Fantasy, geekiness. Bookmark the permalink.