Today is January Armchair Cybils day, so I’m skipping over 16 (gulp!) books that are patiently waiting for me to share them with you, in the interests of having something to say about books that made it to the Cybils shortlists.

The girl and I had another unexpected hospital getaway this weekend (she’s bounced back just fine). My new book of short stories (Queen Victoria’s Book of Spells, with thanks to Colleen at Chasing Ray for the recommendation and my mother for giving it to me) sadly fell out of the hospital bag in the closet and didn’t make it. Happily, I tucked this one from the library in. It made perfect distraction reading! 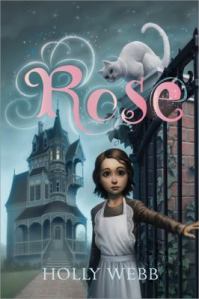 Rose by Holly Webb. Sourcebooks Jabberwocky, 2013.
London, early 20th century. Rose is an orphan, poetically named for the rose bush in the garden of St. Bridget’s Home for Abandoned Girls under which she was found. She’s happy enough there, but dreams of the chance to earn her own living, and so is thrilled when she’s hired as an under-maid at the house of alchemist Mr. Fountain. There was no magic at St. Bridget’s, so living in a household that deals with magic is an education. The staff is all very respectful of Mr. Fountain, whose ability to make gold pays very well indeed. But they are also terrified and distrustful of magic, and terrorized by Mr. Fountain’s seven-year-old daughter, Isabella, who loves to use her budding magical abilities to play practical jokes.

Just as Rose so desperately wants to try to fit in below stairs, she finds that she has magical skills of her own. And when her best friend from the orphanage is just one of a string of missing children, it’s up to Rose, with help from Mr. Fountain’s apprentice and talking cat, to find a way to save them.

I’d heard lots about this book, and it lives up to expectations. Rose is such a perfectly likeable character, so focused on her modest goals, plucky and loyal – I found her irresistible. I always like a good historical fantasy, too, and the trip below stairs reminded me of the “Upstairs, Downstairs” novels I used to read as a child. I know “Downton Abbey” is more popular these days, but I’ve yet to see it – and in any case, this is much more suitable for children. There are tense moments and close calls with moderate violence – one child almost dies, though we see her afterwards – but nothing else questionable. I’d say it’s perfect for younger middle grade readers and up. Even though Rose is a girl, there’s nothing overtly girly in her struggle to find her way in the world, so that it should work equally well for boys and girls.

This is up against some stiff competition in the Middle Grade Speculative Fiction (formerly known as Middle Grade Science Fiction and Fantasy) category. It’s probably a good thing that I’m not one of the final-round judges, as I find it very hard to pick the better book between this, The Rithmatist and Jinx.

I'm a librarian and book worm who believes that children and adults deserve great books to read.
View all posts by Katy K. →
This entry was posted in Books and tagged Armchair Cybils, historical fantasy, youth fantasy. Bookmark the permalink.