Chitty Chitty Bang Bang and the Race Against Time

This is one that I’d checked out for my own Cybils reading towards the end of last year. It fell off my list for a while as I had so much else to read, and my son appropriated it for his own reading. 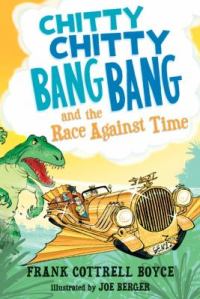 Chitty Chitty Bang Bang and the Race Against Time by Frank Cottrell Boyce. Illustrated by Joe Berger. Candlewick Press 2013. UK edition 2012.
Chitty Chitty Bang Bang Flies Again had included, close to the beginning, a list of places that the Tooting family wanted to go. The magical flying car, of course, has her own agenda, which sometimes aligns with the Tootings’, and sometimes not. The trips this time involve a lot of time travel, including visiting dinosaurs for Little Harry, El Dorado for Jem, and an unplanned meeting with former owner Count Zborowski in New York during the roaring 20s. There, a shady woman declares her intention to marry Count Zborowski, and the Tooting family befriends a young orphan boy, Red. Scarily enough, the jelly baby phones they were given in the first book still work, even across time, and they get alarming messages from Nanny and Little Jack. It looks like only Chitty’s last owners, the Potts family, will be able to give them the help they need to defeat Little Jack forever.

This is just a whole lot of fun. There are car races, swanky dances, hidden treasure, and the magical powers of chocolate fudge. The adventures are madcap, just the right amount of exciting and funny. It might be unrealistic, but I love how reliable the characters are: the parents are loving, not necessarily clueful. Teenaged Lucy always turns out to be an expert in whatever obscure subject they happen to need, most often languages. Jem can figure out how to fix Chitty, and pays attention to the rest of his family. And Little Harry, the baby, notices significant things that the other family members usually think are too large or small to really think about. Sadly, at 234 pages, it was a little too long for my nine-year-old, but I think it would be perfect for a more confident reader of the same age and up, or for reading aloud.

I'm a librarian and book worm who believes that children and adults deserve great books to read.
View all posts by Katy K. →
This entry was posted in Books and tagged adventure, time travel, youth fiction. Bookmark the permalink.