The Mark of the Dragonfly 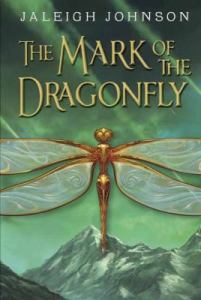 The Mark of the Dragonfly by Jaleigh Johnson. Delacorte Press, 2014.
Piper lives on her own in a scrapper town, where everyone lives off of scavenging and selling the objects from some other dimension that fall down through the meteor showers. And then one day, her best friend Micah risks the radiation of heading out during the meteor shower instead of afterwards, hoping to get first pick. Piper follows him, and finds an injured girl in the wreckage. She has a luminous dragonfly tattoo on her arm, something given only to the most important people of the next country south, the Dragonfly territories. Even though Anna can’t communicate very well, she’s clearly both valuable frightened of someone finding her. Piper hatches a plan to make her fortune by sneaking Anna onto the grand old 401 train to the Dragonfly Territories and turn her in for a reward. On the train, after a rocky start, the girls are befriended by Gee, a mysterious boy with bright green eyes and a wandering soot smudge.

This was a very fun book set in a nicely detailed, multi-species world that had both steampunk and fantasy elements. There are lots of mechanical devices, which Piper is very good at repairing, as well as creatures that can shift between human and dragon forms, as well as other, even stranger intelligent beings. It felt a little bit Asian to me, but perhaps only because of the great armored train – there’s nothing really more to establish the setting as being drawn from any particular real Earth place. I enjoyed it and the developing friendships between the children quite a bit. They were all orphaned for different, believable reasons, and Piper struggled believably between wanting the monetary reward she needs to be able to start a decent life and her increasing sense of duty towards Anna. My mother picked it up and made it three-quarters of the way through in an evening, also enjoying it – though she rightfully pointed out that Piper makes the same mistake multiple times in the book, and one does wish she would learn her lesson the first time. The ending also, alas, is not quite believable. Still, this is one I’d happily give to a middle grade child or adult in search of a fun fantasy adventure.

I'm a librarian and book worm who believes that children and adults deserve great books to read.
View all posts by Katy K. →
This entry was posted in Books and tagged dragons, steampunk, youth fantasy. Bookmark the permalink.

4 Responses to The Mark of the Dragonfly