I’m finally feeling like I’m crawling out from under the massive cold I’ve had for the past couple of weeks – but I’m afraid my energy is still low and thoughts of doing massive review catch-ups or 2014 retrospective posts will have to wait for next year.

But! My Cybils Round 1 committee has a short-list! It will be announced on January 1. I’m so excited both for everyone else to see what we came up with and to see for myself what the other committees were doing.

In the meantime, here are just brief reviews of three laugh-out-loud funny picture books, all of which my daughter loved enough to bring in for her teacher to read to the class. 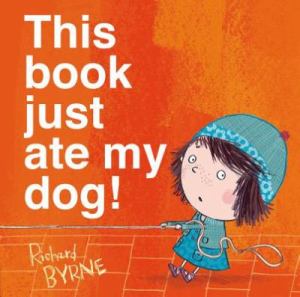 This Book Just Ate My Dog by Richard Byrne. Henry Holt, 2014.
This is a fun inter-contextual, interactive picture book: the book itself is hungry, and Bella’s dog and everyone who tries to rescue it keep disappearing into the gutter. Only the reader can save them! Cartoon-like illustrations with lots of white space add to the effect. 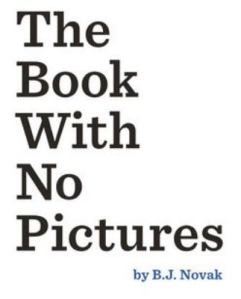 Book With No Pictures by B.J. Novak. Dial Books for Young Readers, 2014.
True to the title, there are no pictures in this book, just brightly-colored text in fun fonts. It has to be read aloud to be properly appreciated, as the whole thing hinges on the silliness that ensues when adults have to read everything in the book, including lots of nonsense words and some mild potty humor, with commentary from the supposedly increasingly frustrated adult already written in. You probably will get tired of this before your kids do. 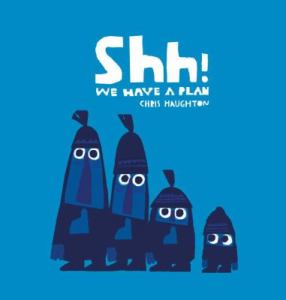 Shh! We Have a Plan by Chris Haughton. Candlewick, 2014.
This is a rare picture book that’s beautiful and silly, with a deeper message underneath. Four people of indeterminate gender are going through a blue forest after a bright red bird. The first three are trying to catch it in a net, while the fourth keeps going up to it, trying to make friends. “Shh! We have a plan!” say the other three, every time, but the plan fails every time. Their refusal to learn, which could come off as depressing, is somehow funny instead, with the reader coming off as the wise insider. Repetitive, easily learned language and the bold block-print art make this a fantastic choice for story time.

I'm a librarian and book worm who believes that children and adults deserve great books to read.
View all posts by Katy K. →
This entry was posted in Books and tagged picture books. Bookmark the permalink.