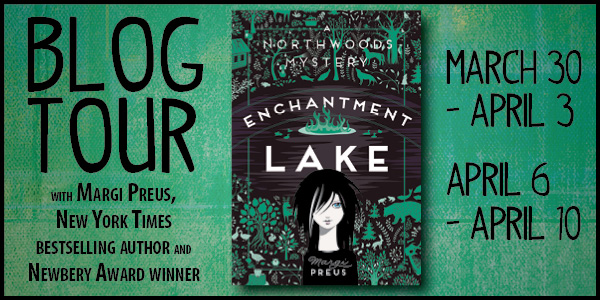 Today I’m honored to be the last stop on the book tour for the upcoming book Enchantment Lake. Thanks to the publisher for an ebook review copy for me, and for three signed hard copies of the book to give away to my readers!  Please see the end of the post for details on the giveaway.

Enchantment Lake by Margi Preus. University of Minnesota Press, April 2015.
Teen TV detective Francie is in New York, about to audition for a new part, when she gets a crackly but urgent phone call from her (Great) Aunt Astrid.  It sounds like someone is trying to murder Aunts Astrid and Jeannette.  When neither police nor the grandfather with whom Francie lives takes her seriously, Francie ditches the audition and gets on first a plane and then a bus to get out to the tiny Minnesota town on Walpurgis Lake where they live.

Once there, she finds things both better and worse than she feared.  Her aunts assure her that they don’t consider themselves to be in any imminent danger – but neighbors have been dying off at a suspiciously rapid rate.  A development company is trying to buy up small cottages and build support for a large paved road instead of the boats-only access to the town, and Astrid and Jeannette are convinced that the real estate agent in particular is willing to stop at nothing to get his hands on potentially valuable properties.  They’ve told everyone that Francie is a real detective, not just a TV one, and seem seriously to expect her uncover the shady dealings and restore peace to Enchantment.

This shares a lot of appeal factors with the Nancy Drew books I devoured as a third-grader, though as people die (off-page) over the course of the book, I’d say it’s aimed at a slightly older audience.  Like Nancy, Francie is one of the cool kids, confident and wealthy enough to make her own way across the country without permission from any adults.  Both these and the older adults’ confidence in Francie’s ability to solve the mystery unaided reminded me of the heroines of early mystery series, clearly more wish fulfillment for kids than realistic. There are close calls, shady characters, midnight expeditions, and possible lost treasure.  But this is at the same time an ode to rural Minnesota (which sounds very much like rural Michigan), with the small, familiar town filled with quirky characters, kitschy souvenirs, and lots of loving described natural beauty.  There is more than one cute boy, as well, and a hint of middle grade appropriate romance.

Francie herself is more than the cool kid she appears at first – still trying to recover from her father’s unexplained death some years ago, normally living with her grandfather, she pictures her heart locked away in a silver box.  Even so, it’s her genuine affection and concern for her aunts and for the town itself that brings her back to Enchantment. This should appeal both to mystery lovers looking to move on from Nancy Drew, as well as fans of small town fiction.

This might pair well with the more whimsical A Snicker of Magic for those interested in the small town angle, while mystery fans might also want to look at Eddie Red Undercover: Mystery on Museum Mile.

Check out the other stops on the tour for other takes on the book, interviews, excerpts, and more chances to win the book for yourself:

The giveaway for three signed copies of the book, one per winner, is open to residents of the US and Canada. To enter the giveaway, please leave a comment with your favorite rural north book for kids/teens OR your favorite kid/teen detective by midnight EST April 24.

I'm a librarian and book worm who believes that children and adults deserve great books to read.
View all posts by Katy K. →
This entry was posted in Books and tagged giveaways, Mystery, youth fiction. Bookmark the permalink.