I have a confession to make: buying a book for myself instantly reduces the chance that I will actually read it.  After all, it has no due date, and as I am at the library multiple times a week and rarely come home without at least one new book, I am surrounded by books with due dates.

And yet, my love and I like Felicia Day enough that not only did we buy the book (from Audible.com), but we both listened to it. 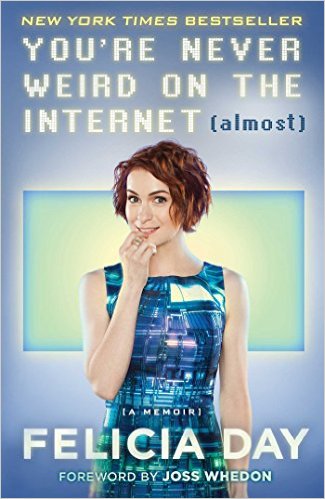 You’re Never Weird on the internet (Almost) by Felicia Day. Touchstone/ Simon & Schuster Audio, 2015.
As Melissa of Book Nut once said, there’s nothing like listening to a comedian read her own work.  It’s funny to read in print, but the timing and delivery you get from listening to it is irreplaceable.  My love and I were fans of The Guild, Dr. Horrible’s Sing-Along Blog, and now – well, OK, our watching of geek&Sundry has gone down the tube since our player stopped supporting YouTube.  Why, YouTube, why?

This is Felicia Day telling the story of her life, from her early days being homeschooled “for hippie reasons, not religious reasons”, her musical life as a classical violinist, and the long, long history of her geekiness.  Just as she does for her character in the guild, Day is honest about her struggles with internet addiction and anxiety while still turning them into something entertaining to listen to.  I never felt like she was laying on the metaphorical violin to the point of being maudlin, even as she was talking about going through some very tough stuff.

What hit hardest for me, particularly as a blogger, was her experience in the changing of the internet from the friendly geek chatrooms on the early internet to the shock of #gamergate and the now routine doxing and rape and death threats made especially to women who dare to be critical of their treatment in games, books or movies.  It’s scary stuff, folks, even for someone like me with my tiny blog with its reassuring books-and-motherhood focus.  I will hold fast to the words of the folks saying that this kind of reaction is the death throes of that kind of hard-line patriarchal thinking, and thank Felicia Day and the many other women brave enough to call out sexism (and the many other –isms) when they find it.

I’d recommend this especially to geeks and fans of comedic memoirs – Amy Poehler’s Yes Please is the one that springs to mind as a likely similar title.
[Updated 4/3/16 to add in the cover photo. Technical issues when I first posted.]

I'm a librarian and book worm who believes that children and adults deserve great books to read.
View all posts by Katy K. →
This entry was posted in Books, Reviews and tagged audiobooks, geekiness, memoir. Bookmark the permalink.

3 Responses to You’re Never Weird on the internet (Almost)