Once again, the Book Smugglers and Fan Girl Happy Hour, convinced me to try a book from a new author – even though it’s meant for adults.  I swear I picked this up without even reading what it was about simply because Ana said she liked Aliette de Bodard. 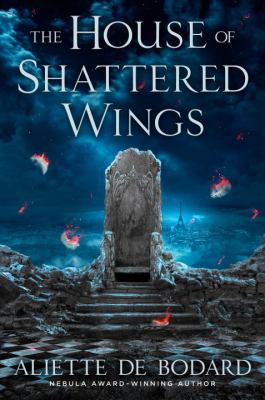 House of Shattered Wings by Aliette de Bodard. Roc, 2015.
In an alternate Paris, the wars fought in Heaven have spread to Earth.  It’s been years since the bloody wars that tore the world apart, but Paris is still divided into houses, mostly run by fallen angels, still at each other’s throats. Outside of the houses, it’s a rough world for the Fallen, who arrive with no memory of why they were cast out, but brimming with much-coveted magic.

As the story opens, Philippe (described first as an Ammonite and later a Viet) feels the rush of a new Fallen arriving and must come along with another member of his gang to try to chop her up for parts to be distilled into powerful angel essence before she comes to her senses.  Before they can get far, they are stopped by a member of the most powerful of the houses, Silverspires, started by Morningstar himself.  While Philippe is glad that Isabelle’s life is spared, he’s much less happy with being forced to join Silverspires by its current head, Selene.  But while there he runs into a hidden trap, inadvertently loosing shadows that starts hunting down members of houses all over Paris. And since it’s clear that things started going wrong right after Philippe arrived, he’ll have to figure out what exactly is going on before it’s too late for him.

So this book is a whole lot darker than my usual middle grade fare – there’s lots of blood, people we care about die or are addicted to the horrifically derived angel essence, and none of the characters (with the possible exception of Isabelle) are straightforwardly good or bad.  I was still hooked.  Philippe himself is intriguing – we know pretty early on that he isn’t Fallen himself, but he’s also been around too long and knows too much to be a regular mortal.  And despite his actions at the beginning of the book, he is a true friend to Isabelle, working hard to help her adjust to life on Earth.  There is a lot of suspense, but even as there’s lots going on, this is also a deep look at faith from lots of angles, both in the face of being rejected by one’s deity and the truth of multiple religions.  Nothing is simple or perfect and it is beautiful partly because of it. The book is deeply impressive, and I will definitely look into de Bodard’s work in the future.

I'm a librarian and book worm who believes that children and adults deserve great books to read.
View all posts by Katy K. →
This entry was posted in Books, Reviews and tagged angels, Asian-European, authors of color, Fantasy. Bookmark the permalink.