Now that my youngest is in second grade, I’m often told that she’s too old for picture books.  That doesn’t stop me from bringing them home – I firmly believe in the magic of a good picture book to capture people of all ages.

Nobody Likes a Goblin by Ben Hatke. First Second, 2016.
You might have noticed that I really like Ben Hatke’s work.  This picture book is about a small green goblin whose best friend is a skeleton.  The poor goblin is forced out of his home when a band of treasure-seeking adventurers arrives and drives him out.  It’s clear how very unpopular goblins are when he’s chased all over the countryside before finding his own place.  The cartoon-style drawings, ink filled with watercolors, show the goblin in such a sympathetic light that readers will root for him all the way.  This could be great for introducing younger kids to the idea of prejudice – goblin hadn’t done anything but be a goblin to offend people.  It’s also a fun, satisfying story, especially fun for fantasy-loving adults.  We gave it to our 4-year-old nephew, and there’s enough detail in the pictures to keep his 6-year-old brother entertained through multiple readings as well. 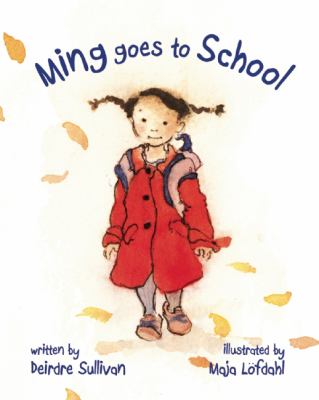 Ming Goes to School by Deirdre Sullivan. Illustrated by Maja Löfdahl. Sky Pony Press, 2016.
A young girl heads off to preschool for the first time in this book that perfectly uses pictures to expand on the very limited words.  The words gently explain the basic rules of preschool, while expressive watercolors follow Ming through her first year as she gradually gains in courage and confidence, especially shown through a big red slide.  This was a little too young for my second-grader, but is perfect for young children, with lots to talk about.

Secret Tree Fort by Brianne Farley. Candlewick, 2016.
A younger sister tries desperately to gain her big sister’s attention by telling her about the tree house she’s building in the back yard.  The imaginary structure (still shown in the pen-and-ink illustrations) gets more and more complicated, as younger sister works harder.  Finally, in a happy ending, the girls work together to build their own real tree house – not as complicated, but more fun.  It took my daughter a bit to warm up to the idea of the book, maybe due to the understated cover illustrations, but once she read it, she returned to it over and over again.

Worm Loves Worm by J.J. Austrian. Illustrated by Mike Curato. Balzer + Bray, 2016.
This has been getting a lot of deserved press this year.  Lots of different small critters want to help when Worm and Worm announce their wedding – but their traditional ideas don’t always work for the happy couple.  How can they wear rings? Should they pick one of them to be the bride?  It’s light-hearted and funny with a good solid core, though happily not all the concepts translate directly to human marriages.  The bright cartoony illustrations on white backgrounds added to the simple, joyful feeling of this book, which both of my children enjoyed.

I'm a librarian and book worm who believes that children and adults deserve great books to read.
View all posts by Katy K. →
This entry was posted in Books, Reviews and tagged picture books. Bookmark the permalink.