Ash & Bramble and The Star-Touched Queen 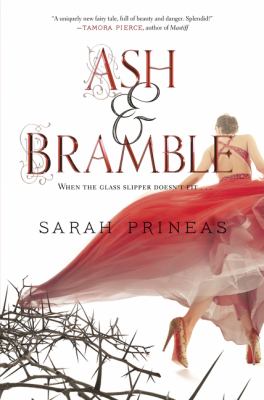 Ash & Bramble by Sarah Prineas. Harper Teen, 2015.
Our heroine wakes from the Nothing remembering nothing of herself and is told that she is a seamstress.  She is to work in the Godmother’s sewing-room making fabulous dresses on very short notice, though her hands tell her that she was not a seamstress before.  Somehow – perhaps due to the silver thimble she found in her hand – she refuses to be as crushed as the other seamstresses.  She picks a name for herself – Pin – and befriends Shoe, the cobbler in the Godmother’s fortress.  She is determined to escape, but the wheels of Story are even harder to get away from than the fortress.  Story fits everyone into a role and makes them play their part – and if she is cast as Cinderella, can she ever escape?  Who would want to escape a handsome prince and a life of luxury?

It’s quite a challenge to tell a story from the point of view of someone who regularly has her memory wiped clean, but this works for me anyway.  Pin has to figure out who she is, literally, multiple times and in multiple situations.  The idea of beloved story plots as a force in their own right was also interesting to explore.  Near the end, Pin and Shoe meet with other characters trying to rebel from Story and the Godmother’s hold over their life, and these included a queer, mixed-race Rapunzel and her partner – so fun, with maybe echoes of Princess Princess Ever After (which I’m hoping will arrive at our library soon!) Brandy at Random Musings of a Bibliophile seems to like the second book in this series, Rose and Thorn, even better – I look forward to reading it! 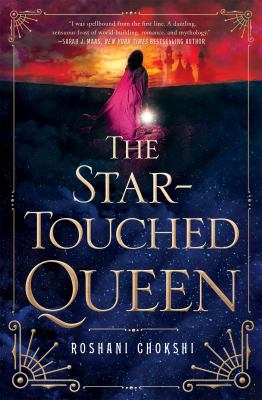 The Star-Touched Queen by Roshani Chokshi. St. Martin’s Griffin, 2016.
Mayavati – Maya for short – has grown up in the harem, sneaking out to listen to the counsels of her father the Raja.  Her horoscope has predicted that she will bring war and death, and that combined with having no mother herself has made her hated in the harem.  Her only comfort is her beloved younger sister Gauri.  Then, her father puts her in an impossible situation, all but ordering her to kill herself.  Just before she does so, she’s stopped by a handsome hooded man, Amar, who takes her with him to his mysterious underground kingdom, by way of the Night Bazaar.  He seems to know much more about her than she knows herself.  Will her curiosity help or hurt her?

This is a spin on the Cupid and Psyche myth, set in an Indian-inspired fantasy world.  I found myself torn on this one.  On the plus side, the language is lush and beautiful, and I always enjoy exploring less familiar mythologies.  Maya is deservedly very angry with her life, both past and present, and the choices she’s either not been given or been forced to make.  Her anger here is valuable and useful, and it’s very rare that I feel teen heroines are allowed this.  On the negative side, the romance is my least favorite kind, based on an unremembered past and pure chemistry rather than mutual respect and shared interests.  I also found the haphazard italicization of some but not all Indian words distracting, though that is a minor issue.  If you enjoy chemistry-based doomed romance, or can overlook it for the strong character and beautiful language, this would be a fine book.  Here’s a quote:

“The week before, I had lost myself in the folktales of Bharata… Myths of frank-eyed naga women twisting serpentine, flashing smiles full of uncut gemstones. Legends of a world beneath, above, beside the one I knew – where trees bore edible gems and no one would think twice about a girl with dark skin and a darker horoscope.”

I'm a librarian and book worm who believes that children and adults deserve great books to read.
View all posts by Katy K. →
This entry was posted in Books, Reviews and tagged fairy tales, India, mythology, teen fantasy. Bookmark the permalink.

2 Responses to Ash & Bramble and The Star-Touched Queen