I first took this book home because it was a Cybils Early Chapter Book finalist, but it went on to win a Pura Belpré Author Award. 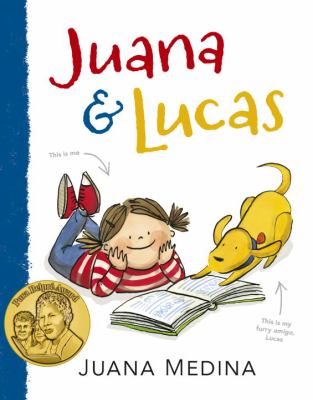 Juana & Lucas by Juana Medina. Candlewick Press, 2016
Juana lives in Bogotá, Columbia and is very happy with her life there.  She is of energy and joie de vivre as she describes her dog, her mother, her friends and the trials of school.  Full-color, full-page pictures of the most important characters (including of course her dog Lucas) But her overall enthusiasm falters in the face of English class. Why should she suffer to learn English when Spanish is so much simpler and makes so much more sense?  Cheerfulness returns when her abuelos provide dream-come-true motivation (which I am not sharing to avoid spoilers).  The chapters are short, the illustrations child-like and plentiful, the action and humor both high – all of it perfect for the early elementary school kid.

I remember how difficult it was for me as a child to wrap my brains around the concept of people finding their own native languages easier than mine – but such a perspective is so very important.  Here, it’s shown through the eyes of a dog- and soccer-loving girl of contagious exuberance.  My daughter opened first to the diagrams and decided that it was boring.  The text, a little smaller than she’s used to, probably didn’t help. But a readaloud from Grandma, who once lived in Bogotá herself, changed her mind.  After that, she read it to herself at least three times.  I very much enjoyed it myself, and look forward to recommending it to many more young readers.  I note that the Booklist review says this is the start of a new series, and I certainly hope it is.

I'm a librarian and book worm who believes that children and adults deserve great books to read.
View all posts by Katy K. →
This entry was posted in Books, Reviews and tagged #OwnVoices, #ReadDiverse2017, Cybils, Early Chapter Books, Latino/a. Bookmark the permalink.