It seemed like a Sign when this book by an author who was on my Top 10 Fantasy Authors I’ve never Read appeared on the Cybils Young Adult Speculative Fiction shortlist this year. 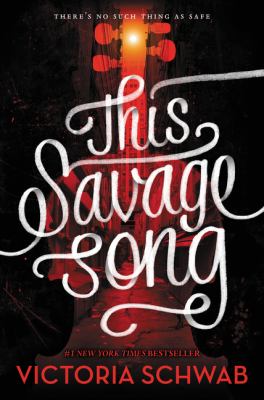 This Savage Song by Victoria Schwab. Greenwillow Books, 2016
In the post-apocalyptic world where this story is set, a monster is born every time an act of violence is committed.  The monsters are different in actions and appearance depending on the specific act that brought them to life.  People gather in cities for refuge from the monsters, but as stressed people are huddled together, more and more monsters are created.  The city of Verity is divided in two – in one half, the leader takes payments from the residents to keep them safe from monsters, using monsters sworn to his service.  In the other half, three of the worst kind of monster keep things under control.  Both sides claim their way is the best and safest and would like to reunite the city under a single leader.

Kate Harker is the teen daughter of one leader. While her father would like to keep her safely at a boarding school away from all of it, she’s willing to do whatever it takes to prove that she is her father’s daughter, and worthy of being his successor.  She’s promised to reform if only her father will let her stay at home and go to school in the city.

August Flynn is the adopted son of the other leader.  He knows and hates that he’s a monster, fighting his hunger, even as his brother tells him truthfully that those they hunger after are those who most deserve death.  He finds solace in his violin and the company of his sister.  He, too, is looking for a way to prove himself to his parents.  Now, a chance has come – to disguise himself as an ordinary teen boy and attend the school that Kate Harker has just started attending.

They should be enemies, but both strangers in a new place, uniquely aware of the precarious and definitely-not-right nature of the world, find themselves drawn towards each other. That’s of course surprising in context but inevitable for the kind of book it is – except that Schwab so far avoids the expected romantic angle, letting Kate and August go through all kinds of horrors together, as violence is unleashed and secrets uncovered, testing their loyalties and beliefs, while just being friends.  It’s a powerful story, and I’ll definitely be looking for the sequel, Our Dark Duet, which is out this month.

I'm a librarian and book worm who believes that children and adults deserve great books to read.
View all posts by Katy K. →
This entry was posted in Books, Reviews and tagged Cybils, musical fantasy, teen fantasy. Bookmark the permalink.

2 Responses to This Savage Song