Outrun the Moon by Stacey Lee

More action-oriented historical fiction from the author of Under a Painted Sky. 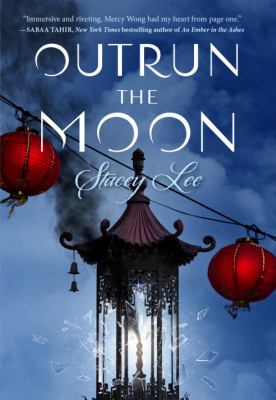 It’s San Francisco in 1906.  Our story starts on a literal high note as our heroine, Mercy Wong, climbs into a hot air balloon made by her best friend and hopefully intended Tom.  Though their parents probably approve of the match – despite Mercy’s “bossy cheeks” – both teens have broader ambitions than their parents.  Tom is finds aviation much more interesting than his father’s career in traditional medicine, while Mercy aims to become a successful businesswoman.  Her first step is being willing to do whatever it takes to get into the prestigious, all-white St. Clare’s boarding school.

It turns out that nothing but pretending to be a wealthy heiress straight from China (which she’s never seen) will do to get her into the school – and that’s just the beginning of her troubles.  Elodie du Laq, the owner’s daughter and Mercy’s roommate, know her secret and is determined to make life difficult for her.  But Mercy is beginning to make friends when the great earthquake hits and upsets everything.  It’s going to take someone like Mercy, used to making her own way despite obstacles, to keep the surviving girls of St. Clare’s alive in the chaos that follows. But will Mercy have any family left to go back to?

This is a winning combination of disaster survival and personal growth. Earthquake survival is an attention-getter on its own, but there is so much more.  Dealings with prejudice of race, class and education, the awareness of teens coming to terms with them deciding whether taking their own path is worth disappointing their parents, and the parents who in turn fail them are all bound together with Mercy’s optimistic outlook and determination to find a way, no matter what – and just a touch of romance.  Emily Woo Zeller’s narration highlights the drama of the story, while giving appropriately different voices to the wide variety of people portrayed.  This is a great choice both for fans of historical fiction and for kids middle school and up assigned to read it.

6 Responses to Outrun the Moon by Stacey Lee