I’m still trying to catch up on all the books I read for my presentation at the Allied Media Conference in June, so it’s time for shorter takes.  Here are three books perfect for the middle school theater fan. 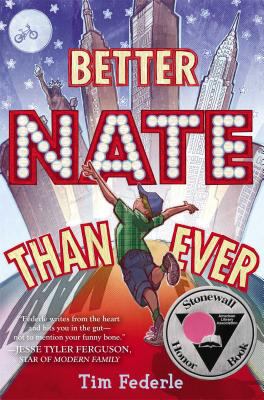 Better Nate than Ever by Tim Federle. Simon & Schuster, 2013.
This is one I’d been wanting to read since it first came out – hooray for the push of needing to talk about it!  Twelve-year-old Nate from Janksburg, Pennsylvania, is constantly bullied for looking like a “fag” at school and pestered about meeting cute girls by his dad. He’s not sure about any sexuality yet – but he is sure about one thing: his love for Broadway.  Supported by his best friend Lesley on cell, he sets off on a bus trip to New York City to audition for a role in E.T.: the Musical.  It’s just not as easy to break into the world of child stars as he was hoping, and his allowance doesn’t stretch as far as he’d hoped… but when he sees two men kissing through the window of a night club with no one stopping them, he knows he’s in the right place. The mix of Nate’s real-world problems and the improbability of his Broadway dreams make for a heady and hilarious mix that’s simultaneously heartwarming.  Don’t miss the sequel, Five, Six, Seven, Nate.

Star-Crossed by Barbara Dee. Simon and Schuster, 2017.
Thirteen-year-old Mattie is going through two major middle school problems at once: a deep and unrequited crush on a cute boy and dealing with her former friend Willow no longer inviting her to the huge parties she throws, even though Mattie’s other friends, Lucy Yang and Tessa Pollock, are invited.  She’s dressed up as Darth Vader for just such a Halloween party with her friends’ encouragement, so that she can attend unrecognized.  But while there, she has an encounter with a cute new girl from England, Gemma.  From here, the plot the plot of Romeo and Juliet, if it were a comedy instead of a tragedy. Mattie and Gemma end up starring opposite each other in a class production of that same play, and Mattie explains it as they’re working on it, so this will be clear even to kids who haven’t read it themselves.  My colleague Mrs. M. pointed out that Mattie is unusually self-aware and articulate for her age, not having any sort of identity crisis over crushing on people of opposite genders in a short time period.  The angst all comes from liking a person and having to act out her real feelings on stage.  All kissing happens in this context, which keeps it entirely appropriate (if improbable) for any kid interested in the topic.  There’s lots of slapstick humor to lighten the story, from the Darth Vader costume to duels with straws, making the whole thing light and sweet as Verona’s fro-yo. 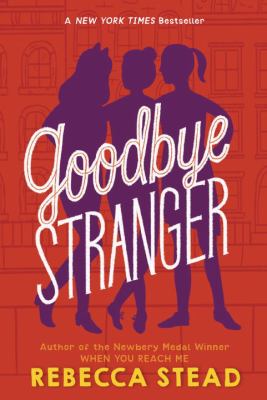 Goodbye Stranger by Rebecca Stead. Read by Kimberly Farr, Meera Simhan and Kirby Heybourne. Random House/Listening Library 2015.
Newbery-award winning author Rebecca Stead’s is admittedly more straight-up middle school with a side of theater.  Best friends Bridge, Em and Tab are all changing as they head to middle school and join new groups.  Bridge starts wearing cat ears every day as she starts off feeling swamped, though her new friend Sherm convinces her to join the theater tech team.  Em, an avid soccer player, has developed a figure and the interest in boys to go with it over the summer.  Tab’s English teacher, “the Berperson” has Tab going off on feminist rants.  Most of the book is told from Bridge’s perspective – including getting involved with Em trading increasingly racy phone photos with her crush.  These alternate with a section told in second person from the point of view of a high school student skipping school for angsty reasons whose name isn’t revealed until the very end, as well as Sherm’s angry, unsent letters to his Nonno Gia, who recently moved out – all read by different narrators in the audiobook.  Bridge, who was in a very bad car accident years earlier, still suffers from PTSD and trying to figure out the reason behind her survival. All of the major characters except for Em (I think) have explicit ethnicities that have relevance to their lives – Armenian, Indian/French, Italian – without being their whole identities.  I haven’t always loved Stead’s books (I’m in the minority here), but this one really worked for me.  Such an accurate, sensitive portrayal of middle school and today’s issues that every middle schooler would benefit from reading it.  So many themes and stories woven together that it feels like Literature while still being approachable.

I'm a librarian and book worm who believes that children and adults deserve great books to read.
View all posts by Katy K. →
This entry was posted in Books, Reviews and tagged #ReadDiverse2017, LGBTQ, theater, youth fiction. Bookmark the permalink.

11 Responses to Three for Theater Kids