Seeing as how it’s March already, I’m going to try to finish reviewing all my Cybils books this week, so I can move on to the books I’m reading this year.

Dragonfly Song by Wendy Orr. Pajama Press, 2017.
This novel set in the Bronze age Mediterranean mixes prose and poetry in a world that’s divided between islands that still hold to the older Goddess worship, and those that have male-headed pantheons.  Into this world, the Lady of a small island has a daughter born with tiny extra thumbs – too imperfect to be the heir. She ends up, thumbs cut off, being raised as a lowly servant, then sent as tribute to one of the larger islands, where she’s trained to dance with the bulls.  There’s a lot of sorrow for our heroine to overcome, though it’s beautifully told, with a well-developed setting. I need to try to read the sequel, Swallow’s Dance. 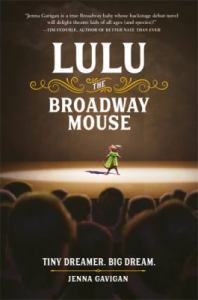 Lulu the Broadway Mouse by Jenna Gavigan. Running Press, 2018.
Thanks to the publisher for this review copy!  Author Jenna Gavigan, herself a former child star on Broadway, brings us backstage with the story of a tiny mouse who longs to be a star.  Her family has helped with things like costumes and tech work for years – but will there ever be room for Lulu’s dream of singing? Lulu has to deal with snooty child star Amanda, as well, and hoping that her understudy Jayne will also get a chance to go onstage.  This is filled with insider knowledge and would pair well with the books from my Three for Theater Kids post. 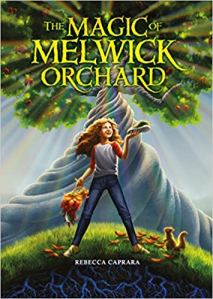 The Magic of Melwick Orchard by Rebecca Caprara. Carolrhoda books, 2018.
Isa knows her parents have a good reason for neglecting her – her little sister Junie is in the hospital with cancer.  How much can the magic apple tree in her new yard help? And can Isa let go of her determination not to need friends? Full of fun made-up words like “perfecterrific” and “squg”, this has humor and heart, despite the depressing sick sibling topic.

Wizardmatch by Lauren Magaziner. Dial Books for Young Readers, 2018.
Stop the presses!  This is the second middle grade speculative fiction book with a Filipino or part-Filipino character that I’ve found in my nearly 15 years of looking.  Lennie Mercado and her brother Michael are Filipino-American on their father’s side, wizard on their mother’s. They’re called to the wizard realm to enter a contest against their many, many cousins to be the next Prime Wizard.  Serious issues of systematic racism and sexism are hid under goofy contests and fun powers like stretching arms, growing hair, or barfing up birds. This went some delightfully unexpected places.