The Benefits of Being an Octopus

Here’s another author from my Kidlitcon panel, which I’m posting from the airport on my way to Providence! 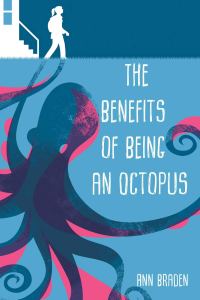 The Benefits of Being an Octopus by Ann Braden. Sky Pony Press, 2018.
Seventh grader Zoey mostly keeps her head down on the bus and at school.  At home, she takes care of her three younger siblings while her mother works at a waitress at the pizza parlor.  It’s her job to keep the kids out of the way her mother’s boyfriend Lenny and his father, who spends the day in his recliner smoking and watching angry news.  She doesn’t have time for homework, and she feels it’s better not to raise expectations by doing it.

This resolve cracks when an especially kind teacher, Ms. Rochambeau, gives her the assignment to write about what animal she’d want to be.  Doing this assignment leads Ms. R., herself a first generation college graduate, to convince Zoey to join the debate club, even though this involves making alternate arrangements for care for her younger siblings. This in turn starts Zoey on a path towards being able to label and combat some of the toxic behavior happening at home.

Meanwhile, her friend from the trailer park Silas is given a hard time by other kids on the bus for enjoying hunting, while her best friend Fuschia is dealing with an extremely unreliable mother.  This sensitive book deals with a wide array of topics, ranging from attitudes about the rural poor to common ground talk about guns, domestic abuse, recognizing gaslighting, and the power of working together. That could feel like too much crammed into one book, but they all felt like issues that a kid in Zoey’s situation would really be dealing with. I was rooting for her all the way, and hope for more books from Ms. Braden.

Also on this panel are Paula Chase, author of So Done; Barbara Dee, author of Star Crossed and the upcoming Maybe He Just Like You, among many others; Varian Johnson with The Parker Inheritance; and Jo Knowles with the upcoming Where the Heart Is.

I'm a librarian and book worm who believes that children and adults deserve great books to read.
View all posts by Katy K. →
This entry was posted in Books, Middle Grade, Print, Realistic and tagged youth fiction. Bookmark the permalink.

1 Response to The Benefits of Being an Octopus