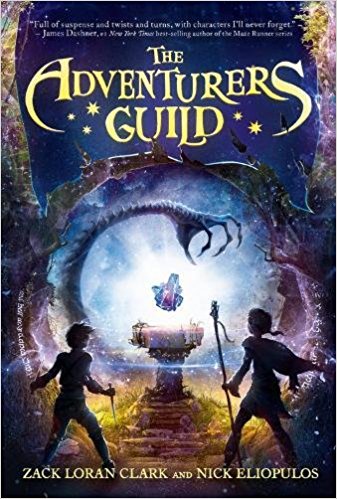 Zed is a servant’s son, half-elf in a city where that’s a much bigger deal than his fawn-colored skin.  His best friend is Brock, a wealthy merchant’s son.  They are both just old enough for the city’s big formal guild selections, both sure they know where they want to go – Zed to the Magicians and Brock to the Merchants.

Instead, they both end up part of the disreputable but very important Adventurers Guild, the only one whose members journey outside the walled city and brave the monstrous Dangers that mean that everyone now must live in one of a handful of similar cities.

Once there, they’re part of a group of new recruits that includes Liza, a nobleman’s daughter, and Jett, a dwarf.  At one point in the story, Jett loses a leg, and it’s made clear that he’ll still be a full part of the guild.  The team makes their way around mysterious adults and treacherous plots with lots of action and, as promised, adventure.  Things wrap up neatly to feel satisfying, while still leaving room for this to continue as a series.

There is a lot of good stuff going on here, with diversity in race (including humans and non-humans and different skin colors), gender, income, and ability all wrapped together convincingly with a very entertaining plot and a satisfying amount of soul-searching. I think the only reason that I didn’t personally love it as much as I wanted to was that the twists seemed a little too familiar, perhaps reminiscent of John David Anderson’s The Dungeoneers.  It has lots of appeal, though, and I could see less jaded and more plot-oriented readers than me loving it.  I’m saving my review copy for my son to read, as it should be exactly the sort of thing he enjoys.

I'm a librarian and book worm who believes that children and adults deserve great books to read.
View all posts by Katy K. →
This entry was posted in Books, Reviews and tagged epic fantasy, monsters, youth fantasy. Bookmark the permalink.

3 Responses to The Adventurers Guild