Here are three of the Cybils elementary/middle grade graphic novel finalists.  It’s always good to read what the other Cybils panelists came up with!

Real Friends by Shannon Hale and LeUyen Pham. First Second, 2017.
Newbery-honor winning (and personal favorite) author Shannon Hale gets real with this fictionalized autobiography as she details her struggles with friendships through elementary school.  Even though she managed to be at least on the fringe of The [In] Group at one point, a social feat I’m glad never to have achieved after reading her tales of it, the pangs of friends made and lost resonated deeply with me. Hale also shares stories of sibling abuse, as well as her issues with anxiety – both caused by mental health issues that went unrecognized at the time.  Pham’s illustrations are perfect, as always, showing both Hale’s reality and her vivid imagination.  My daughter managed to read this at least 10 times in the few weeks we had it out from the library, and my mother and I both very much enjoyed as well.

Pashmina by Nidhi Chanani. First Second, 2017.
Priyanka is also having a hard time fitting in at school.  She feels isolated from her mother, too, who won’t answer Priyanka’s questions about why her mother left India or who her father was.  She gets along best with her uncle, but when he has a new baby, that stability it threatened.  Her life changes forever when she puts on her mother’s beautiful pashmina shawl.  It transports her from her dull life, illustrated in black and white, to a full-color, magical India, where she’s shown around by Kanta, a blue elephant and a peacock named Mayur. My eight-year-old thought it looked too old for her to try, but I found it a moving story of heritage and women’s choices. 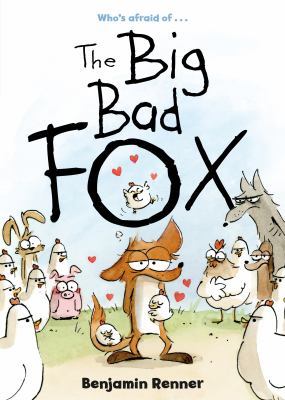 Big Bad Fox by Benjamin Renner. First Second, 2017.
A scrawny fox is on a mission to prove to the wolf that he’s up to stealing chickens.  The chickens usually beat him up, and the guard dog is lazy enough not to bestir himself when he knows the chickens can take care of themselves.  But one day, the fox steals eggs instead, so that he can raise his own chickens.  They hatch into adorable, hoodlum chicks, and hijinks ensue.  How can the fox eat the little critters who call him Mama and insist that they are foxes, too?  This has sketchy, frameless panels filled with watercolor art, and was another one my daughter finished only to turn around and start again from the beginning.