This weekend is the A2CAF, the Ann Arbor Comic Arts Festival, which I used to love helping out with back when it was still Kids Read Comics.  Naturally, I’m at work at my regular library rather than there right now, but in celebration of graphic novels for kids, here are three I’ve read recently. 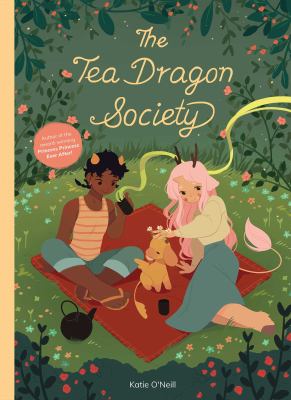 The Tea Dragon Society by Katie O’Neill. Oni Press, 2017.
Greta, a young goblin (though she just looks like a brown-skinned girl with small horn buds), is learning the nearly forgotten sword smith trade from her mother.  One day she finds a small lost dragon in the street. It’s a tea dragon, and her efforts to return it lead her to the Tea Dragon Society – two older men (or at least males – one is decidedly nonhuman) who live together and a shy girl about Greta’s age with memory loss – who care for the dragons who grow tea.  Raising the tea dragons and the slow, careful harvesting of their leaves for tea is also nearly a lost art, one that Greta is eager to learn, too. Like Princess Princess Ever After, there are gentle LGBTQ overtones here.  This is an oversized but slim book with beautiful, beautiful manga-inspired art, just the right length (as I think Ursula Vernon said) for reading over a cup of tea.  I would really love a longer, more fleshed-out story, as well as a tea dragon of my own, but this is still lovely.  There’s a related card game coming out later this month, which I’m also quite curious about.

Suee and the Shadow by Ginger Ly and Molly Park. Translated by Keo Lee and Jane Lee. Amulet Books, 2017.
Here is the last of the Cybils middle grade graphic novel finalists.  (You can read my reviews of the other 2017 finalists here and here.) In this decidedly creepy Korean import, Suee and her father move from the city to the suburbs of “Outskirtsville”, where her father continually breaks his promise to come home in time to cook dinner.  Suee feels a great sense of superiority towards the country kids at her new school, which allows her to feel smug rather than hurt when she doesn’t make friends easily.  She only barely remembers a trip to the school Exhibit Hall, where she a handled an old pot.  But suddenly, her shadow is talking back to her and is not at all pleasant.  Other children around the school are losing their shadows altogether and becoming so zombie-like the unaffected children call them “zeroes”, though the adults don’t notice the severity of the problem.  Two people refuse to be put off by Suee’s prickly behavior – a smart, popular boy named Hyunwoo and Haeun, a shy girl in an old-fashioned yellow dress.  Can Suee trust them enough to solve the mystery? This is a great one for budding horror fans.

Be Prepared by Vera Brosgol. First Second, 2018.
In this fictionalized version of her own memories, Vera tells the story of how young Vera ended up spending a summer at a rustic camp.  Vera always feels left out at school – she’s invited to sleepovers, for example, but left out of the circle.  Her family can’t afford the expensive summer camps other kids go to. When she hears about a camp just for Russian-American kids that her church could help pay for, she begs her mother to let her go, convinced this will be a place she can finally fit in. Except, not so much.  At nearly 10, she’s put in a tent with two 14-year-olds who have been coming since they were seven.  Everything is done in Russian, including history lessons, and while she can speak it fine, her reading is at the same level it was when she left Russia at age five.  The stinking, doorless outhouse is a nightmare, and her little brother won’t speak to her.  Will anything redeem this trip, and will she even survive to be picked up?  Brosgol tells the story in rounded pictures, showing her eyes big behind her giant glasses.  The coloring is in shades of green throughout, which somehow works even when highlighting rosy cheeks and knees.  This is a so-awful-it’s-hilarious story to appeal to the many fans of realistic graphic novels like Smile and Real Friends.

Three graphic novels, all very different – it just goes to show (if you weren’t already convinced) that it’s a format, not a genre.