It’s summer reading time at the library.  I love crowds of kids excited about reading, but it does make it challenging to get anything else done.  But waiting patiently in my own review queue, I have a trio of African-based fantasy books.

This is one I’d been hearing about and even promoting since it came out, and was happy to find it available on audio from Overdrive/Libby.  When I put it on a poster in the library (What to read after you watch Black Panther), I knew it was time to actually read it myself. 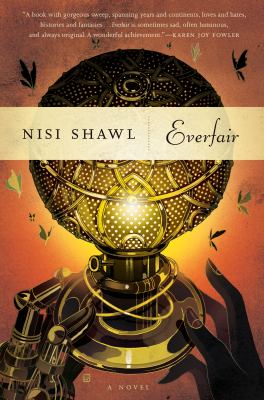 Everfair by Nisi Shawl. Narrated by Allyson Johnson. Tantor Media, 2016.
This is an alternate history of the Congo, which in real life was controlled and horribly abused by Belgium.  In 1889, a group of people from super-liberal Fabian Society in England join up rather incongruously with some African-American missionaries and Chinese laborers, where they buy land from Belgium to form a Utopian society in the Congo, which they call Everfair.  But the Congo had residents before Belgium invaded, and its king and head queen don’t want any foreigners taking over their land, however well-intentioned they are.  The story follows the little country and its characters over the course of decades, as people fall in love and break relationships off, fight battles and survive or not, become more convinced of their faith or gradually shift, and as their own perception of the country they’re trying to make changes.  My personal favorites were British Daisy and French Lisette, sometimes living together, sometimes apart, especially as the mixed-race Lisette realizes the depths of Daisy’s unconscious prejudice.  Queen Josina, the favorite of the king’s wives, is also a wonderful character.

I was glad to have been warned by other reviewers (Maureen at By Singing Light, at least) to expect a story of the country, so that I wasn’t disappointed at how characters come and go in the story. Although it didn’t come up in my original description, there are definite fantasy elements here similar to those in Black Panther.  I don’t know if it’s still Afrofuturism, the category I put it in for my display, if it’s set in the past – but it’s cool all the same.  Allyson Johnson does a fine job reading, narrating with an American accent but giving all the characters appropriate accents, including African, British, French, Irish, and various Americans.  The only place she faltered was with a German who had only a sentence or two, so I forgive her.  Overall, this is a compelling and thought-provoking book.

Nnedi Okorafor has been my go-to author for African fantasy for about a decade now, though I hear N.K. Jemison is fabulous, too.  Stay tuned for more if the summer reading hordes allow, and share your favorite authors!

3 Responses to Everfair by Nisi Shawl