Oh, look!  Even though I bought this book on its release date, I ambled my way through it, so that I’m just now getting to writing the review as the beautiful stand-alone cover of Stephanie Burgis’s novella, included in this anthology, has been released. 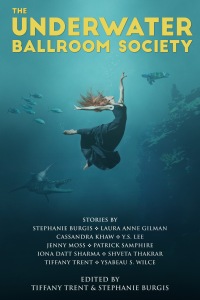 This is a collection of speculative fiction stories by a diverse array of authors with just one requirement: include an underwater ballroom somewhere in the story.  Whether that ballroom is considered magical or prosaic, fantasy or science fiction – all up to the author.  I probably would have gotten this anyway just to read the prequel novella to Burgis’s the Harwood Spellbook series, Spellswept, set before Snowspelled and told from Amy’s point of view.   There’s also a story from Patrick Samphire in his Victorian Mars series, featuring teen detective Harriet.  But I was excited to see a story from Y.S. Lee – a story set after the Twelve Dancing Princesses and thus going nicely with another small reading obsession of mine – this one about sisters helping each other out of an abusive situation.

Ysabeu S. Wilce tells a story of an aging rock diva tracking down her former lover, stolen by the king of fairies.  Iona Datt Sharma’s features a female smuggler and the interesting opportunity that comes her way.  In The River Always Wins by Laura Anne Gilman, the underwater ballroom is a leaky cement basement punk rock club, now past its prime.  Attending for the first time in years – despite the itchy gills it causes – brings terrible repressed memories back to our heroine, but friendship holds true even in the grim setting.  This contrasts strongly with the glamourous setting of Shveta Thakrar’s high society underwater ballroom, where an Indian-British undercover agent works to keep all of fairy from being sold to the highest bidder.

There are more stories, of course, but I’ll stop there in the interests of getting this published.  I savored these stories on my work breaks over several weeks, enjoying all of them, and was sorry to come to the end.  My only regret is that since I already have Spellswept in this collection, I don’t need to buy it in its soon-to-be published stand-alone edition with this gorgeous cover – but as the cover I have is also lovely, it’s a pretty small regret.

I'm a librarian and book worm who believes that children and adults deserve great books to read.
View all posts by Katy K. →
This entry was posted in Adult, Books, Fantasy and tagged Fantasy, short stories. Bookmark the permalink.

3 Responses to The Underwater Ballroom Society