Stephanie Burgis has a new book in the Harwood Spellbook out on February 25!  Thank you so much to the author for the review copy! 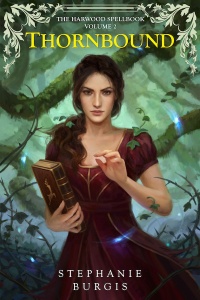 Thornbound. The Harwood Spellbook II by Stephanie Burgis. Five Fathoms Press, 2019.
Cassandra Harwood overcame a host of difficulties – literally – to marry her love, Rajaram Wrexham, as told in Snowspelled.  Her dream of starting her own college for female magicians is about to come true – she and her sister-in-law Amy have converted the disused male dowager house on her family’s property, Thornfell, to be used as a school, and have a good starting class with talented and dedicated girls and young women from different walks of life.  This is supposed to be her happily ever after.

Except… both the Boudiccate and the College of Magicians seem to have decided that they don’t really like the idea of Thornfell College.  The Boudiccate has been giving Wrexham so many long-distance work assignments that he and Cassandra haven’t been able to celebrate their wedding night, months after the wedding.  The most annoying, conceited, and condescending weather mage Cassandra has ever met, Luton, turns out to be the one Wrexham hired to teach weather magic. And Cassandra gets word that representatives from the Boudiccate are going to be conducting an inspection, watching all her classes from the very first day.

Things are falling apart even before they start, and Cassandra (and Amy) have to deal with all of it on next to no sleep.  Amy isn’t sleeping because of nursing her infant daughter, while Cassandra keeps being woken with nightmares of being wrapped in thorny vines.  If only she still had her magic and could do a simple sleep protection spell!

One of the underlying themes of this series has been challenging established gender roles.  The Boudiccate is truly worried that letting women learn magic will be just the first step towards establishing a patriarchy in Angland, when they have seen first-hand how damaging that can be for women in other countries. (Amy’s nursing her own daughter, as an upper class woman with plenty of responsibilities, goes counter to tradition in both their world and ours of a similar time.)

Thornbound adds a new theme, as well.  We’ve already seen multiple romantic relationships that we’d consider interracial in our world not being a big deal.  For our lesbian couple, first introduced in the last book, magically talented Miss Banks and budding politician Miss Fennell, the big barrier was more that a woman in politics is expected to be married to a man who’s studied magic (then either giving up other ties or maintaining a mistress in secret, I suppose), so that Cassandra’s school will hopefully allow them to uphold that part of the tradition.

But there is also deep prejudice against humans having romantic relationships with the fey whose land runs parallel within Angland. The dangers of both the prejudice and the forbidden relationships that spring up anyway results in much of the real danger in the book, though there is still plenty of time for Cassandra to do some growing of her own. Stephanie Burgis manages somehow to cover some dark and relevant themes in a short, satisfying story that still has the sparkle of a light-hearted fantasy romance.  I hear the next planned book in the series will be starring Miss Fennell and Miss Banks, and I’m very much looking forward to it. 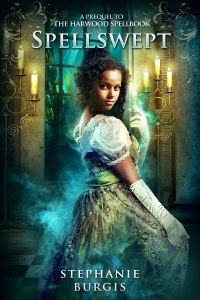 In case you missed it, you can read about Amy and Jonathan’s courtship in Spellswept, available either on its own or as part of the Underwater Ballroom Society collection.  I seem not to do as well with writing full reviews of shorter fiction, but if you want short tastes of Burgis’s romantic fiction, I heartily recommend the novelette The Disastrous Début of Agatha Tremain and the short story The Wrong Foot, a twist on Cinderella, both available just for Kindle.

I'm a librarian and book worm who believes that children and adults deserve great books to read.
View all posts by Katy K. →
This entry was posted in Adult, Books, Fantasy, Print, Romance and tagged elves, Fantasy, fantasy romance. Bookmark the permalink.

4 Responses to Thornbound by Stephanie Burgis