A Perilous Journey of Danger & Mayhem: a Dastardly Plot 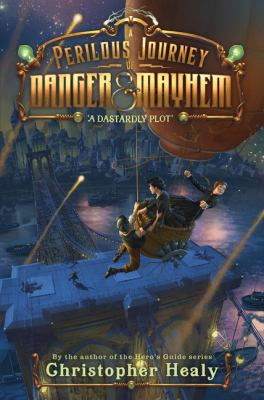 1883 – It’s the Age of Invention in an alternate New York City.  Molly Pepper is trying to help her mother Cassandra succeed as an inventor while also running her deceased father’s pickle shop to support the inventing.  If only Cassandra could get accepted by the Inventor’s Guild and get a spot at the World’s Fair she’d be all set – but they are only open to men. Cassandra is invited to join a group of female inventors (real inventors, fictional team) called the Mothers of Invention, but they seem very hoity-toity.

While snooping at the Inventor’s Guild headquarters, Molly meets Emmett Lee, Alexander Graham Bell’s assistant, whose Chinese-born father was captain of a voyage to the South Pole that vanished. When Molly and Emmett discover a plot to set off an explosion at the World’s Fair, they have to both try to stop it and find someone – anyone – to believe them.  This is full of madcap adventures with strong feminist and pro-immigrant themes. I didn’t love it quite as much as I thought I would given all the great elements, but I enjoyed it and then looked up more about all the Mothers of Invention.