The House in Poplar Wood and The Boy, the Bird and the Coffin Maker

Back to the backlog of Cybils books!  Here are two creepy-beautiful stories, both on the shorter side.

The House in Poplar Wood  by K.E. Ormsbee. Chronicle Kids, 2018.
There are three great shades, all rivals, who take human apprentices in the town where our story is set. All three are hated even worse by the Whipple family, which has always run the non-magical side of the town.  It’s creepy to begin with, but made worse in the past, when the apprentices of Death and Memory fell in love and had twins. Since then, they’ve been forbidden to see each other. The two Vickery twins have grown up in separate sides of the same house – Lee living with their mother and Memory, and Felix with their father and Death.  Lee is able to go to school, even if it’s designed to kill curiosity, while Felix must stay home. When older teen Essie, who worked for Passion, falls off a cliff to her death, both boys reluctantly team up with Gretchen Whipple, the mayor’s daughter. The book is filled with dark woods, cold rain, forced apprenticeships, the courage to stand up for beliefs and freedom, and the importance of questioning the system. 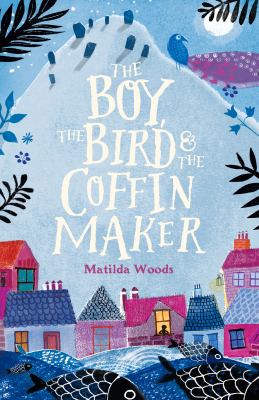 The Boy, the Bird and the Coffin Maker by Matilda Woods. Illustrated by Anuska Allepuz. Philomel Books, 2018.
The mountainous city of Allora was once utopic, with its winding streets, bright houses, and rough seas with fish that simply flew out to be eaten by its residents.  Then it was hit by a terrible plague. After his wife and all their children died, Alberto turned from carpentry to making nothing but coffins. Thirty years later, he is given a project by the mayor to make an extra-large square coffin of golden oak (there is a lot of fat shaming here about the mayor needing the extra-large coffin.)  As he’s working on it, taking breaks to make a simple coffin for the recently deceased but very private Miss Bonito, a boy appears out of nowhere, with an astonishingly beautiful bird – quite surprising, on an island that’s almost completely isolated from the outside world. Helping the boy find a place of safety also seems to help Alberto work through his long-standing grief.  I was unhappy about some aspects of this, including previously mentioned fat shaming and the method for dealing with the problems from the boy’s past. Trigger warning: an abusive father (though the abuse is in the past.) But it’s a tiny gem of a book, a shorter story told with beautiful language and illustrations.

I'm a librarian and book worm who believes that children and adults deserve great books to read.
View all posts by Katy K. →
This entry was posted in Books, Fantasy, Middle Grade, Print and tagged youth fantasy. Bookmark the permalink.