One of the co-authors of the best-selling teen series The Illuminae Files kicks off an exciting new middle grade series. 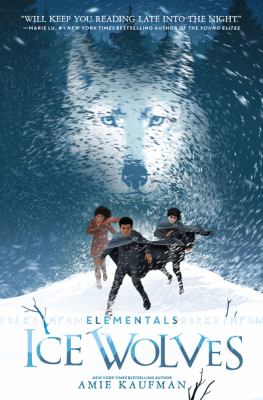 Ice Wolves. Elementals Book 1 by Amie Kaufman. Read by Jonathan McClain. HarperAudio, 2018.
Twin street orphans Anders and Rayna look dissimilar enough despite their matching brown skin and hair that they’re able to pretend they don’t know each other while making their living as pickpockets in the crowded port city in the kingdom of Vallen where they live.    The monthly test in the city square to find twelve-year-olds who can transform into the ice wolves that protect the city is one of their best gigs.  But when Anders fumbles his mark, Rayna goes up on stage to protect him – only to transform into a scorch dragon, enemy of the city, who then flies away.  Anders has to be tested, too, to keep the pretense going – and is shocked to transform in to a wolf.

Anders decides that the only way to track down Rayna is to go the Ulfar Academy with all the other young ice wolves and learn how to use his new-found powers.  There he meets and makes friends with a girl named Lizabett, who holds the very unpopular opinion that ice wolves and scorch dragons used to be friends and could be again one day.  Anders was used to Rayna being his only friend, and the one who did all the talking for him, so he’s got quite the learning curve trying to make friends and speak for himself – even as he’s still trying to hold a part of himself back, as he plans to leave the Academy despite its strict code of loyalty to the pact.

This is an exciting story in a new world that still made room for some great characters. It feels contemporary even though it’s a historical setting with a Nordic flavor.  It sets us up to learn lots more both about the wars of the past and what might happen next in the series.  I’m looking forward to reading more, and my son, who loved the Illuminae Files, is also excited for this one. I’d give this to fans of the Magisterium series or other stories of magical schools, too.